How would banking in UK change if minimum required capital to open own bank would be £100k instead of €5m?

Let's assume that at some point people realized how great the banking profession is and a lot of entrepreneurs were willing to take the burden off the bankers by starting their own bank. The only problem they had was lack of required capital, which for the UK, or any bank in an EU member state, was about €5m. In the following parliamentary election people voted for a liberal (not just by name) party that promised to lower the minimum required capital to £100k, so that banking would no longer be a privilege of the super rich. Every middle class entrepreneur can now easily gather the required capital and start competing in the free market of banking services.

I know that there is an exception to the minimum required capital for particular categories of credit institutions which the UK used for building societies but let's focus on fully-fledged banks exclusively.

Given that banking, Fractional Reserve Banking especially, heavily relies on support from taxpayers, mostly through Deposit Guarantee Schemes (DGS) without which we can safely assume that FRB wouldn't be possible, banks would have to find other ways to build trust than simply rely on always-solvent taxpayers, and the fact that the minimum capital to open one's own bank in the UK is €5m, what can we reasonably expect to happen if that minimum required capital was lowered to, say, £100k?

In other words, is there any justification, other than we are a cartel go away, that banking, or FRB in particular whose biggest asset is taxpayers guarantees through DGS, be restricted to super rich people that can afford the €5m minimum required capital? Why can't we have real competition in the banking sector by allowing for creation of micro banks?

Competition in the banking sector would take an unprecedented turn and, as with every liberalisation of market rules, quality of the services would rise. Regular as sine wave financial crises would then be occurring with higher frequency but a lot smaller amplitude. No bank will be too big to fail as small banks would take a substantial part of the market.

An example of small lending company which is not a bank in regulatory terms but despite its micro capital it successfully competes with big banks on the lending market - Burnley Savings and Loans. Not directly the kind of changes that I am requesting but it shows that it is possible for a small company to succeed on the lending market.

The minimum required capital matters, but in the opposite direction: the more capital you have, the more likely you can challenge big banks. Because the costs of a new bank look like this: 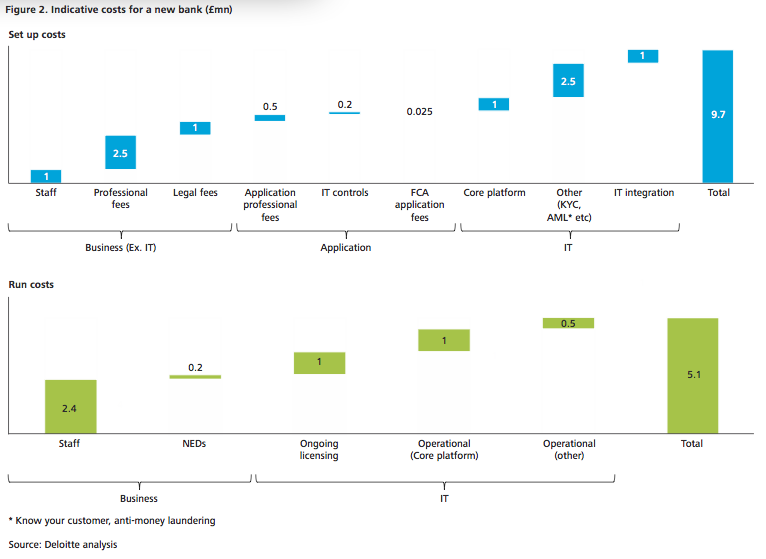 You need $15 mn just to keep it alive. Recall that, meanwhile, you are supposed to provide credit, so you'll have to borrow more money for this.

With 150K GBP in capital and fractional reserve rules, a new bank will be wiped out with losses. And it has no impact on the competition in banking, which is already quite tough.

Not the answer you're looking for? Browse other questions tagged monetary-policy money-supply banking or ask your own question.

2
What assurances are there that the Federal Reserve does not give money to banks?
0
How would banking in EU change if taxpayers withdrew their support for Deposit Guarantee Scheme?
2
Do privately owned banks ever indefinitely lend money to their owners?
1
What is the logic of Bagehot's policy of high interest rate?
1
Does Not Having a Fractional Reserve System Cause More Inflation?
2
Is money mostly created (out of nothing) by banks making loans?
0
There is a paragraph about the history of credit rating agencies that I don't understand
24
Why do banks take deposits if they do not need them to make loans?