Why did creating the Eurozone cause the cost of labor to rise in Greece?

As I understand the implementation of the Euro as a common currency caused labor prices to spike in certain countries, Greece being one of them. Why did this happen? Why did it affect certain countries more than others?

I think we should ask why didn't Germany's labor cost increase, while everyone else's did:

The eurozone had economic growth before 2008, so appreciating labor was expected, especially due to increasing labor mobility. Wages were converging to Germany's.

In addition, Southern Europe saw an influx of capital (this is how they caught the debt crisis). Capital triggered some speculative economic growth — 4% in Greece — and an increase in wages.

One more thing. When the crisis hit in 2008, the private sector fired a lot of people. But high-paid employee remained. Which lead to this 12% pike in the business sector alone, as the average wage of the remaining workers increased: 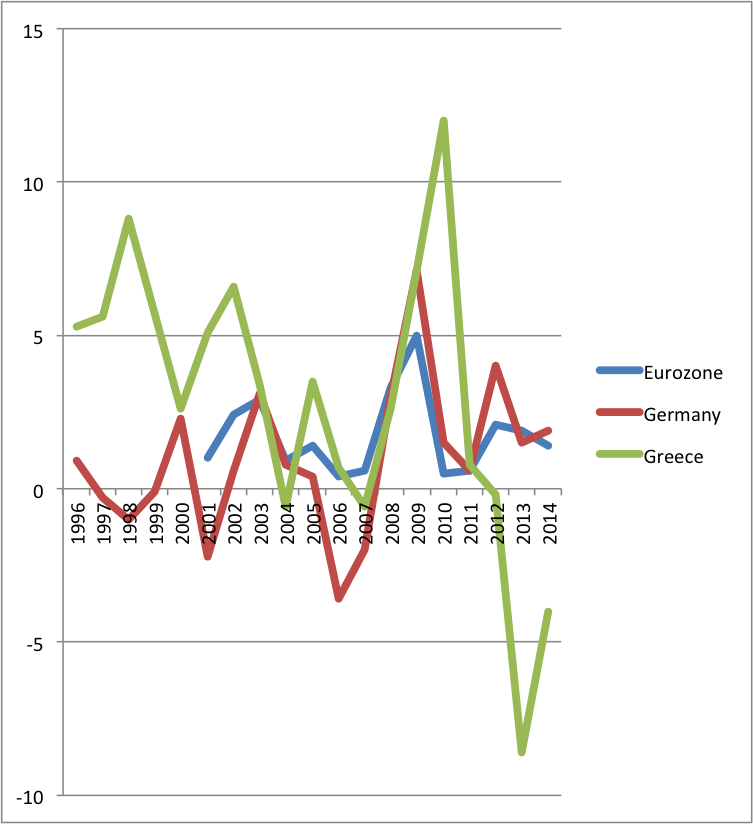 The public sector kept its employees, so on average you have no peaks in 2010 (the first figure). And after 2010, you see a decline — basically caused by the same determinants, now working in the opposite direction.

I would emphasize Anton's last point. Many countries have regulations that prevent senior/tenured workers from being fired first. This quickly implies that as firings increase, average costs tend to increase (ignoring inter-firm wage dispersion). Or, in other words: Any country with a highly regulated labor market will tend to see increased labor costs as an immediate response to a crises.

The only way to overcome this - given regulations - is if firms/sectors with higher average wages lay off more workers than the average.

Greece had a relative large (and inefficent) public sector. At the time of the financial crisis greece wasn´t able to finance it and it reduced the expansion for the public sector. Thus the demand of the public sector was decreasing. And therefore the gdp decreased. The relative small private sector wasn´t able to compensate the decrease of the public sector. Additionally the private sector wasn´t, and still isn´t, very competitive. This cannot be changed very quickly, if a country cannot depreciate it´s currency. That´s why some people say, that a Grexit is the only way, that greece could manage the crisis. In the past years Greece is trying to get competitive in the euro zone. But this is a difficult way. Greece has to produce more high quality goods. To achieve this, greece has to make the "right" reforms education sector, taxation, public services, etc. But it is taking a long time that these reforms make the greece economy competitive.

Ireland had a relative large financial sector. Therefore Ireland has hit hard by the financial crisis. Because of the recovering of the worldwide financial industry in the past years ireland was able to grow.

17
What does Yanis Varoufakis mean by "surplus recycling mechanism"?
3
Can lower working hours beat unemployment?
9
Why can't countries print another country's currency?
0
Why would a rise in the discount rate stop foreign gold drain and make banks fail?
2
Why is the cash in circulation on the rise in rich countries?
2
How exactly did Venezuela's economy fail?
0
Why would overemployment mean that labor is used inefficiently?
1
Why labor-augmenting technological progress increases employment and wages?
5
What determines whether slavery is economically efficient in industrialized/modern era economies?
0
Is there a way to trade currencies several times and end up with more money than one starts with?