Can someone explain how the equilibrium points in the image below (source: The Foundations of Econometric Analysis) represent marginal utilities. I have read about the relationship between the marginal rate of substitution and the ratio of marginal utilities in terms of the theory of consumer behavior but have not seen marginal utility in this context. I imagine this use is similar but my logic is failing me.

The figure represents a demand curve progressively shifting to the right with a lagging supply. 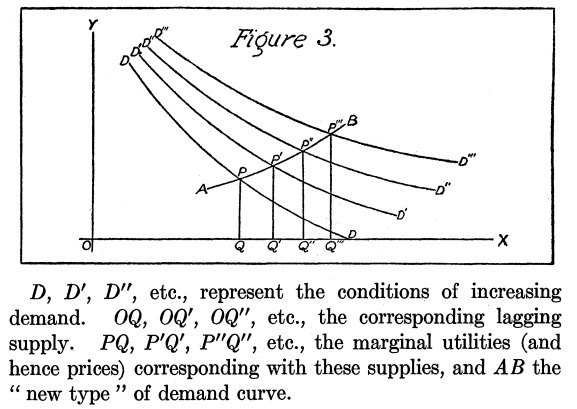 Suppose there is only one good and I fix a price, $p$. The demand curve implies a corresponding quantity $q$.

Now, reduce the price by a tiny amount to the new level $p'$. The demand curve tells us that this reduction in price will cause an increase in quantity to $q'$. 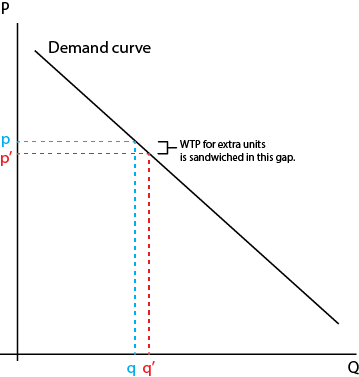 Remember that I said the change in $p$ was tiny? If this change is almost zero then the number of extra units demanded will also be small and we can get an exact value for the consumer's willingness to pay for these units: $p\approx \text{WTP}\approx p'$.

$^†$ Note that the distance $PQ$ in your figure is just the height of the demand curve too.

Not the answer you're looking for? Browse other questions tagged microeconomics utility supply-and-demand self-study or ask your own question.