Should I use current prices or volumes estimates?

I am writing an empirical paper with National Account's data from the OECD. The analysis of the data consists basically in calculating the cross-correlations among countries of GDP, investment, consumption etc, over a period from 1960:1 to 2015:1.

The problem is that there is a huge amount of measurements available in OECD's website and I don't know which one to choose.

But I still don't know if I should choose between the data in current prices or in volumes estimates.

What are the differences between the two approaches? Which implications would I be faced with by choosing each of them?

If you are conducting empirical exercises, you should use real values i.e. volumes. If the data has time dimension, it is even more imperative to deflate the variables. The reason for this suggestion is following:

Take output data, over time output changes and usually around a rising trend. The trend growth of output could be due to rising prices instead of volume of output. The following image shows the effect of inflation on output: 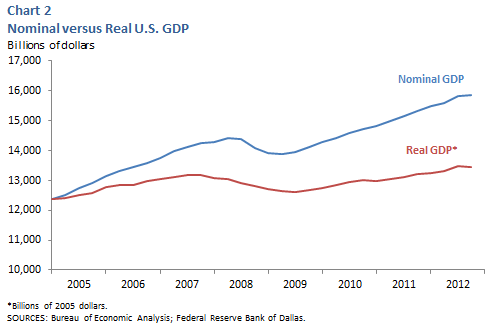 The nominal GDP grows at a relatively higher rate than real GDP. The economy appears to have grown, in fact, much of this growth is due to rising price levels, not due to positive growth in volume of output. Using the data from the graph, you can see that

This shows that the volume of GDP, real output, did not grow as fast. The nominal GDP, on the other hand, gives us false impression that the economy is growing at a faster pace.

If you are using the data in statistical or econometric exercises, you should use volume data in constant prices.

And, if you are comparing performance across countries, you should convert the data to international dollars using purchasing power parity (PPP). I think OECD database offers PPP based macro-variables

Not the answer you're looking for? Browse other questions tagged macroeconomics international-economics or ask your own question.

6
Empirical estimates of CRRA and CARA utility
1
Estimates for 'inflation expectations': the 'breakeven' rates. What are they?
0
Net Positions vs Gross Positions as they Relate to the Current Account
1
Why can we see the Current account as variation in NIIP?
4
Why doesn't the government create money, spend it for free without interest, and recollect it with taxes?
1
Why shouldn't governments use Forex reserve to pay their debts?
1
Are there economic models that predict (only) a medium/long-term negative effect of protectionism?
1
Current Account vs Net Exports
2
Why should prices come down (in theory) in an educated society with a well-run government?