If the government prints money to build housing for cheap rental. Is that a good idea? Or will it damage the economy causing inflation?

This would be government housing, rental only. Not for sale.

This is looking at the UK, based on the idea of one of the opposition leader candidate's idea.

This is a partial answer, in the sense that it addresses the case for state-sponsored house building, rather than the question of how that should be financed. In general, any means by which the state might finance spending is likely to introduce some kind of distortion into the economy. The question then faced is whether that spending generates benefits sufficient to offset the cost of the distortion.

I agree with the general sentiment of others that if there is a well-functioning, uninhibited market for housing then any intervention in that market (such as an artificial increase in supply) is likely to reduce overall efficiency and, in particular, lead to the misallocation of resources within the economy more broadly. @suriv outlined the intuition for this.

However, if there are distortions that prevent the housing market from functioning efficiently then a state-sponsored increase in housing supply can be efficiency enhancing. This is a simple application of the more general "Theory of the Second Best", which holds that if there is pre-existing distortion in the economy then introducing another distortion can sometimes make things better, not worse. There are various reasons why the housing market might not function efficiently. Here are a couple:

All of these factors seem to be important considerations in the UK market (which is, I guess, the example that motivated your question). Since we are talking about state-sponsored house building, here is a graph that shows how much of the slack private-sector housebuilders in the UK took-up when the state withdrew from house building in the 1980s:

The answer is "basically none".

But does that mean that the market is now failing to supply enough housing, or just that there was previously an inefficient excess of supply that the market has now corrected? A figure that, I think, is broadly indicative of the fact that the UK housing marketing is currently not functioning well comes from this UK government report. It states that the UK is currently building houses at a rate of 135,000/year, but creating new households at a rate of 240,000/year. The 240,000 figure does not include either backlog from undersupply in past years, or demand for housing from foreign speculators (the FT reports that 75% of new homes in London are bought by foreigners, many of whom are speculators or will otherwise not occupy the property full-time). The UK has never in its history managed to build 240,000 homes per year except at times when the state accounted for close to half of all house building.

As somewhat of an aside, the effects of this long-term failure to meet demand upon the price of UK housing has been significant. Here is a comparison of various national house price indices from The Economist: 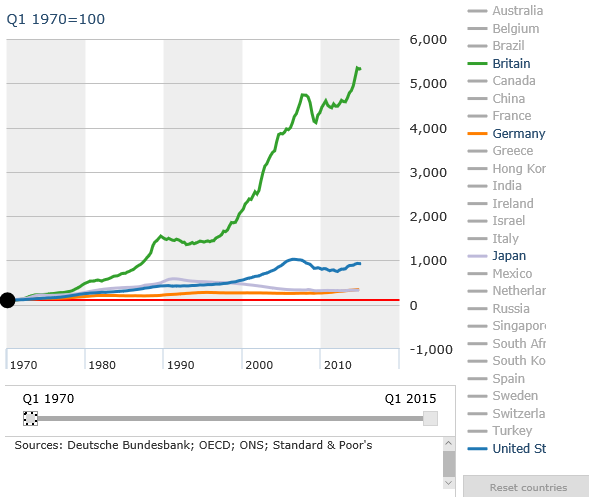 If one believes that such price growth is the consequence of a distortion in the market then it has important knock-on consequences for other aspects of economic efficiency: it encourages speculation and high levels of indebtedness, distorts investment decisions, and induces internationally mobile workers to leave the UK. As regional price disparities are magnified by rapid price growth, internal migration is also potentially distorted. If we care about equality then this kind of price growth also implies a growing wealth gap between property owners and non-owners.

Money doesn't build houses: people do. Building houses requires real resources. Money is not a real resource, it is just a means of exchanging resources. So, as a first approximation, printing money just leads to inflation.1

There is an additional problem to consider. People who spend their time building houses cannot use that time for producing other goods, for example food. Even if we forget about inflation, it is clear that if more people are building houses, fewer must be growing food. With less food being produced, its price will increase.

A good maxim to remember is "there is no such thing as a free lunch". The nature of the economy is that resources are limited and valuable. Unfortunately, in political discourse there is a notable tendency to focus too much on the benefits and too little on the costs.

1. There is some evidence that a relatively low rate of inflation can actually be beneficial for an economy (versus no inflation). There a few explanations for this, for example wage-stickiness, but I think that discussion is beyond the scope of this question. Note that, even then, the benefit is from the inflation itself, not from what the government spends the money on.

Not the answer you're looking for? Browse other questions tagged quantitative-easing or ask your own question.

2
Is Quantitative Easing an asset-swapping or money-printing exercise by the Federal Reserve?
2
How much money was distributed during quantative easing?
3
Screw foreign investment, lets just print money
4
During deflation, is there any risk on 'printing' money?
2
Print money to buy and nationalise companies
3
What happened to the money multiplier after QE?
0
How much money has the Fed printed?
5
Is QE the equivalent of printing money?
1
Why may printing trillions of dollars not lead to inflation?