How much would it take to end global extreme poverty?

E.g., according to this page, Jeffrey Sachs estimated that it would take $175bn/year for 20 years to do so.

What are some other estimates?

The evolution of this global poverty gap from 1990-2013 is graphed below. As should be evident, at the current rate of decline in global extreme poverty, the world is on track to hit the World Bank's goal of completely eliminating extreme poverty by 2030. 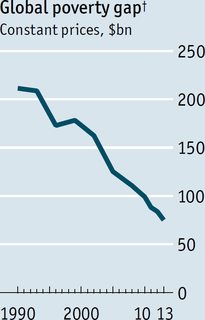 Nonetheless, even if there were no further progress and global extreme poverty stayed frozen at 2013 levels,

a transfer of US\$78b a year would suffice to completely eliminate extreme poverty.

The Economist adds an important caveat:

In reality, of course, money cannot be directed so precisely to the poor, nor transferred cost-free. In some countries, the infusion of money might also push up prices and currencies, making the endeavour more expensive. Nonetheless, this thought experiment illuminates the diminishing size of the problem. The world can afford to end poverty. Indeed, it might end poverty before it figures out how to measure it accurately.

P.S. Note though that the reduction in global extreme poverty has been largely due not to transfers or aid of the sort envisioned by Jeffrey Sachs, but to economic progress, most notably in China. 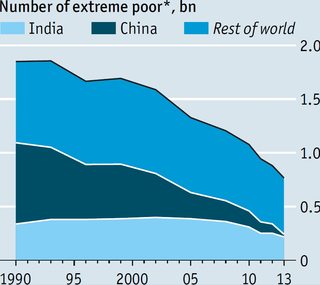 No amount of money can save the poor people from having to pay for overpriced commodities. Give 100 billions of $US to each poor person today and the next day their corrupt politicians will increase the prices of the food a billion times (with the help of their family-business monopolies), driving the majority poor again. The poor countries lack real free markets and then only competition regulators and anti-corruption policies and practices can solve that problem. Speculation of prices drives the people poor and even into starvation. link1 - link2 - link3

Also keep in mind that the way poverty is measured can be quite deceiving. A farmer with a full stomach who sells products for less than one dollar a day is considered to live in extreme poverty. But if the same person leaves the farm and works in the city for a corporation for five dollars a day and starves (no money left after paying rent, water and electricity) then he is considered to be lifted from poverty and on moving steadily on their way to a prosperous life - by the the economists certified by the top-level universities and working for top-level corporations. Heard about "Africa raising?" - e.g. Ethiopia. As a result, while the UN bodies provide triumphant news that extreme poverty is decreasing, the inequality is actually increasing - link2 - link3

The bottom line is: instead of throwing with money to the poor and watching them being sucked up quickly by their corrupt politicians, we should better pressure those corrupt governments in order to implement real competition, free markets and to reduce corruption. Freezing the assets of those corrupt politicians (e.g. real estate properties in London and Monaco and bank accounts in Switzerland) might be a very good start for pressuring them - this is my own opinion but it is supported by the reality of the recent EU and US freeze of Russian elite assets. link1 - link2

Economists and political scientists appear to be converging to the view that the quality of institutions is the critical factor for countries to develop successfully, and to make effective use of natural resources. (Anand Rajaram, World Bank, 2013)

Not only does corruption affect economic development in terms of economic efficiency and growth, it also affects equitable distribution of resources across the population, increasing income inequalities, undermining the effectiveness of social welfare programmes and ultimately resulting in lower levels of human development. This, in turn, may undermine long-term sustainable development, economic growth and equality. (Marie Chêne, Transparency International, 2014)