How is the interest on fractional reserve money creation paid?

In fractional reserve banking commercial banks create money when they make loans. When these loans are paid back the account is zeroed, the created money disappears, but the bank is still entitled interest. Where does the money to pay the interest come from? Does the central bank necessarily have to inflate the currency to pay it? Does money in circulation generally cover it?

Repayment of interest does require an expansion of the money supply, but not in a way that is inflationary.

Consider first the way that commercial banks make loans. The whole purpose of loans is to borrow against future output— so if you imagine a firm that wants to purchase a machine that will allow it to produce more stuff— and thus have greater future income— the firm may go to a commercial bank and ask to take out a loan. The commercial bank will price that loan at a premium to the risk-free interest rate that reflects the risk of the loan, so that in expectation (taking into account that some loans will be repaid only in part or not at all), banks making riskier loans will be repaid at a slightly higher rate than ones making safer loans.

So firms will be offered an interest rate, and if that rate is less than their expected return on their investment, they'll make the investment. Notably, in this case, they're only borrowing money and investing because their future output will be higher. So when all of this works out (that is, when there isn't a credit bubble in which people are borrowing against future output that won't materialize), future output $Y$ (i.e., GDP) will be higher by an amount that is the amount of additional money $M$ required to repay the interest on the loans.

Now if you recall the relationship between the money stock $M$, output $Y$, the price level $P$, and money velocity $V$:

It's easy to see that if $V$ is constant, then:

Which, when combined with the observation that $ \% \Delta Y \geq \% \Delta M $, implies that an expansion of the money supply that is merely sufficient to allow for repayment of interest would actually be deflationary. This should make perfect sense: in expectation, output must increase by more than the amount captured by banks in the form of interest, otherwise firms in the real economy would never bother investing in fixed capital. So the money supply will in all likelihood increase by an amount strictly greater than the level required to repay interest, yet without any increase in inflation.

Loans to consumers are similar, so I won't give them a full treatment. Consumers are borrowing against their own future output, and foreclosures are generally priced in to the interest rate on a loan.

You'll note that I left out the case where in the aggregate, future output is less than that required to repay outstanding loans. This is intentional, as it's worth treating as a separate question.

The key thing to note is that the interest paid does not simply accumulate at the bank. Nobody runs a business in order to just make a big pile of money to keep in a safe. The banks spend the money back into the economy through staff wages, running costs and dividend payments to shareholders. All these outflows of money will ultimately be spent on real goods and services produced by the rest of the economy. This flow of money is a source of money for the interest payments.

You can get an idea of what is going on by imagining an economy with a fixed money supply. The figure below shows a hypothetical flow of the money in the economy. The flow marked "trade" and is simply the money circulating back an forth between households and industry as people earn money and spend it on what has been produced in the factories.

At the same time the loan interest payments are equal to the spending by banks (those staff wages, running costs and dividend payments to shareholders).

As you can see, the flows can balance. Nothing is broken, no new money needs to be added to pay the interest. The system can continue indefinitely. 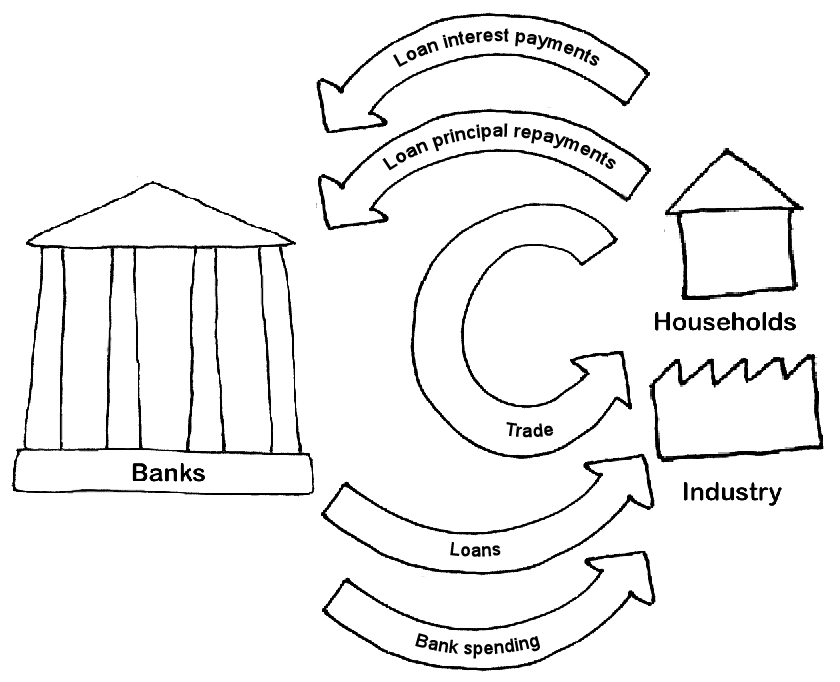 The issue regarding the source of macroeconomic interest (and profits) appears to be unsettled among economists. A free paper on this issue, entitled “What is the Source of Profit and Interest? A Classical Conundrum Reconsidered,” by Gunnar Tomasson and Dirk J. Bezemer, dated January 29, 2010, and posted March 11, 2010, can be found online at https://mpra.ub.uni-muenchen.de/21292/. Personally, although I have not exhaustively researched this issue or economists’ attempts to address it, of the explanations I have studied, I believe that the monetary-circuit approach of Professor Louis-Philippe Rochon most plausibly resolves the conundrum by considering that, in firms’ investment cycles, a cash outflow required for the purchase of capital goods and financed by long-term bank loans occurs in the first period of production in the investment cycle while long-term bank loans may be paid back over multiple periods of production until the end of the investment cycle. Accordingly, based on my understanding of Professor Rochon's view, the central bank does not necessarily have to inflate the currency to pay macroeconomic interest, and money in circulation can generally cover it.

Interest is income, the reward for a service offered: the renting of (here, financial) capital. From this aspect, it is no different from say, a salary earned for a month's work. This is income too. So,

How salaries are paid? Does the central bank necessarily have to inflate the currency in order for them to be paid? Does money in circulation generally cover it?

How any kind of income is paid? Does the central bank necessarily have to inflate the currency in order for it to be paid? Does money in circulation generally cover it?

The answer, simply and perhaps boringly, is, "it depends". On whether the existing money supply covers adequately the transactions needed for the existing level of total income. If interest income increases while salaries fall, it may be the case that no additional money is needed, for example.

Or it may be the case that both kinds of income increase, but velocity of money also increases - so again, no need for extra money.

Perhaps the most compelling evidence that fractional banking must be supported by a constant expansion of the monetary base by the central bank, is that the Fed while maintaining a somewhat target Fed Funds Rate almost always experiences growth in MB.

The demand to pay interest spikes up the interbank lending rate which incites the Fed to put more money into the Fed Funds market. If there were enough money to pay interest, then such pressure should not exist.

The ethical implications of this are quite alarming. If the money supply increases and a disproportionate amount goes to support the banking system, then this is an indirect transfer from the poor to the rich. As the system continues, the divide will increase unless alleviated by government actions (like welfare) or by bank failures.

Not the answer you're looking for? Browse other questions tagged money-supply central-banking or ask your own question.

0
Interest rates and economic growth
3
Inflation basics and understanding
2
Is it possible to repay the world debt? If not, why do we care?
0
How does paying off debt to the bank work?

17
Why is fractional reserve banking allowed?
6
Who regulates the balancing of the books for commercial banks? How? Is it public information?
6
How does the money supply behave when bank loans are repaid?
7
How is money created on net?
3
Fractional reserve banking and bank insolvency
5
How can non-US banks issue USD loans?
25
Why do banks take deposits if they do not need them to make loans?