I'm looking at two charts from world bank on GDP per capita for Croatia and Russia - and this is what I get: 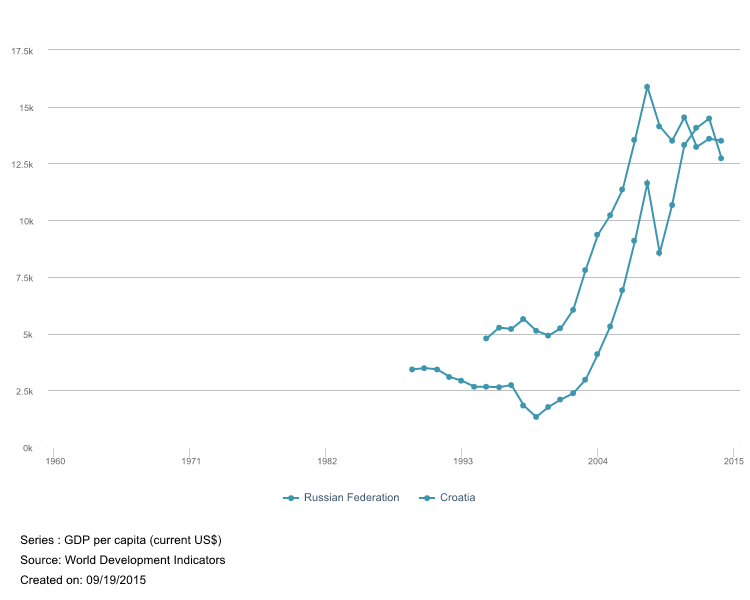 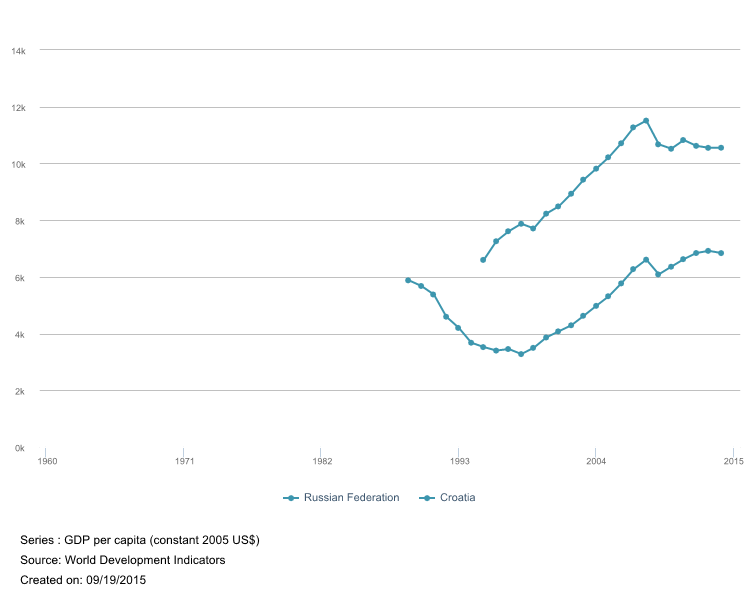 Now, from what I gathered, the first chart should represent nominal gdp and the second one real gdp (in 2005 US$).

The two charts are consistent in the basic sense that the 2005 values are the same in both, with Croatia about $\$10200$ and Russia about $\$5300$. What happens in other years depends on exchange rates and inflation in the three countries concerned (Croatia, Russia and the United States).

The current USD-based figures are calculated much as you would expect: take the GDP per capita in local currency (kuna in Croatia, rubles in Russia) and covert these to dollars at the exchange rates applying in the different years.

But they were not calculated that way.

Instead the constant USD-based figures were calculated by taking the GDP per capita in local currency each year, and were deflated by price changes locally since 2005 to give GDP per capita in constant local currency units, and then converted to dollars using the 2005 exchange rates. Because exchange rates did not match varying relative local price changes in Croatia and Russia compared with the United States, this produces a different result.

There is a way to approach this question to reduce the problem, but that would involve purchasing power parities (PPP) looking at what money can actually buy in different countries rather than market exchange rates, and the statistical invention of the international dollar (not an actual currency) to handle price changes year-to-year. It results in different data again and can lead to different rankings between countries (famously, China would appear to be relatively much richer). Here it would suggest Russia having significantly higher GDP per capita than Croatia since 2011 on a PPP basis, the opposite of your second chart due to the the ruble seeming to have been undervalued in the market exchange rates compared with the kuna in terms of what it can apparently buy locally.

8
Calculating nominal GDP
2
Is it appropriate to change the base year of the real GDP to a more recent one?
5
Ok to normalize GDP change by population change?
1
Questions on comparing GDP between various countries
1
Comparing GDP contractions between Russia and US
1
real gdp per capita vs real gdp
1
How can the GDP's growth rate be positive, when the GDP decreases?