I am interested as to whether or not Educational spending does or does not affect GDP and GDP growth (and as an aside GDP per Capita).

As an overview, I've ranked the countries in each aspect (with 1 being the best and 163 the worst) and then plotted this rank data.

Have I made any obvious mistakes, is there any additional analysis I should do, and is there any conclusion I should come to from this?

I analysed data for 163 countries, including Developed and Developing countries, and compared the Literacy rates, % of GDP spent on Education, GDP and a couple of other data points. All data is from these Wikipedia pages (1 2 3 4 5), which cite the following.

When you look at the data for developing counties and developed counties, it gets confusing. For example, it suggests that low literacy rates increase growth:

This is the key for all graphs. Bear in mind this is a ranking, so lower is better.

Back to the section of graph - the top 10 counties for growth. Note the incredibly poor literacy rate of 50% of them - and only one is in top 50 for literacy. Raw Data. 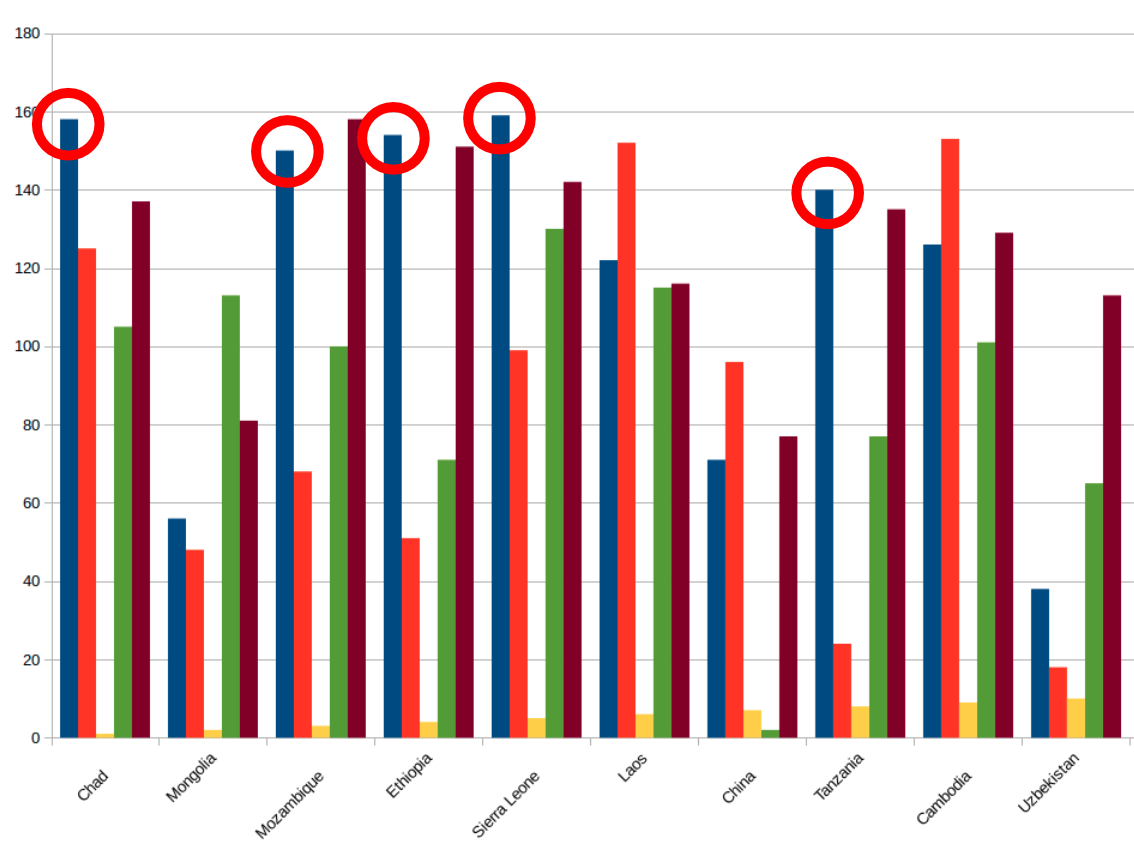 While this looks like it supports your theory, I'm unconvinced there is enough data to show a causal link between the two. I don't think a low literacy rate creates a fast growing economy - rather less developed countries will develop faster (possibly due to a Knowledge Gap) than more developed counties. It also happens that these counties haven't got around to investing much in education, with the notable exceptions of Uzbekistan, Tanzania, and Mongolia. Uzbekistan and Mongolia both seem to have good literacy rankings. Tanzania is an exception here - possibly supporting your theory.

So, of these we want to see if spending on education increases GDP Growth.

Again, Growth is yellow and Education spending is red.

In fact, the ranking of growth seems to be no more organised than when it was sorted alphabetically, and the almost horizontal trend line agrees:

This would suggest that spending on education affects economic growth very little. Instead, let's look at GDP, and GDP per Capita. It does look like as spending decreases, GDP decreases a little too, but in reality it seems to be either perfectly level, or decreasing slightly:

There isn't enough of a slope to really draw conclusions here. Let's plot Education against GDP: 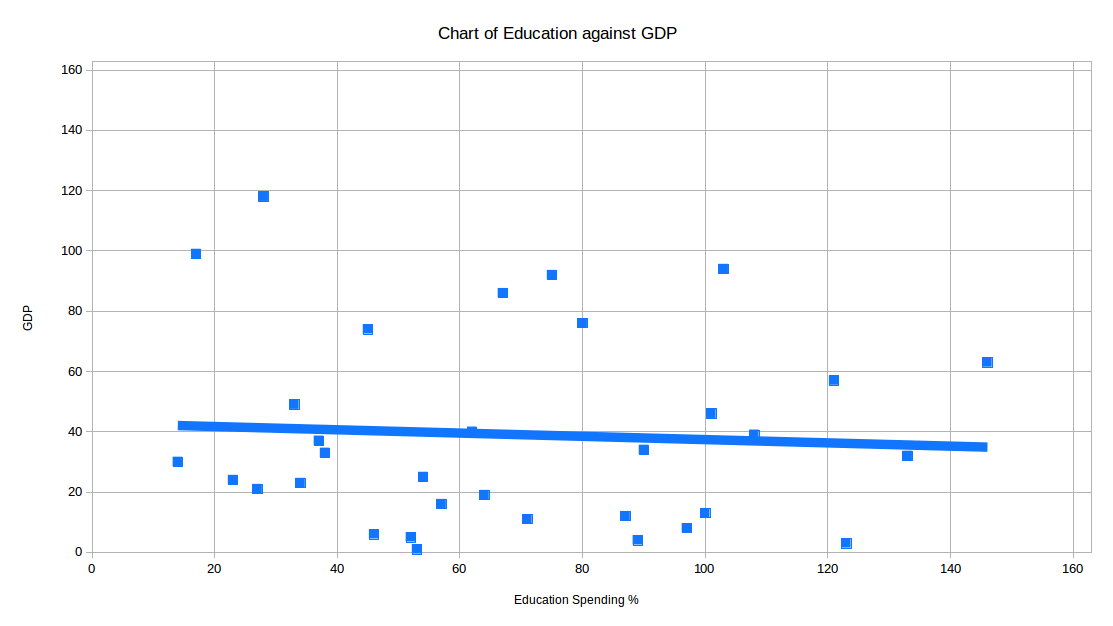 No correlation there, and the same for Education against GDP per Capita: 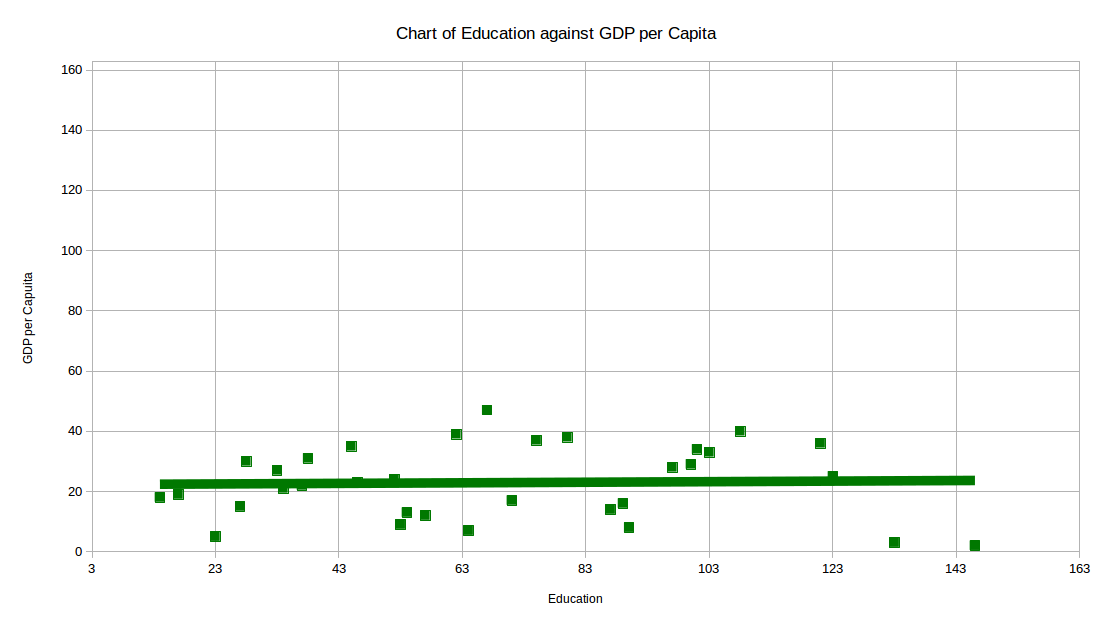 What about when sorted by Literacy?

The Growth rate (Yellow) seems to improve as literacy get's worse. This ties in with what happens when you include developing countries - and when you look at GDP (Green) it is decreasing as decreases increases. So is there a correlation between Literacy and GDP? 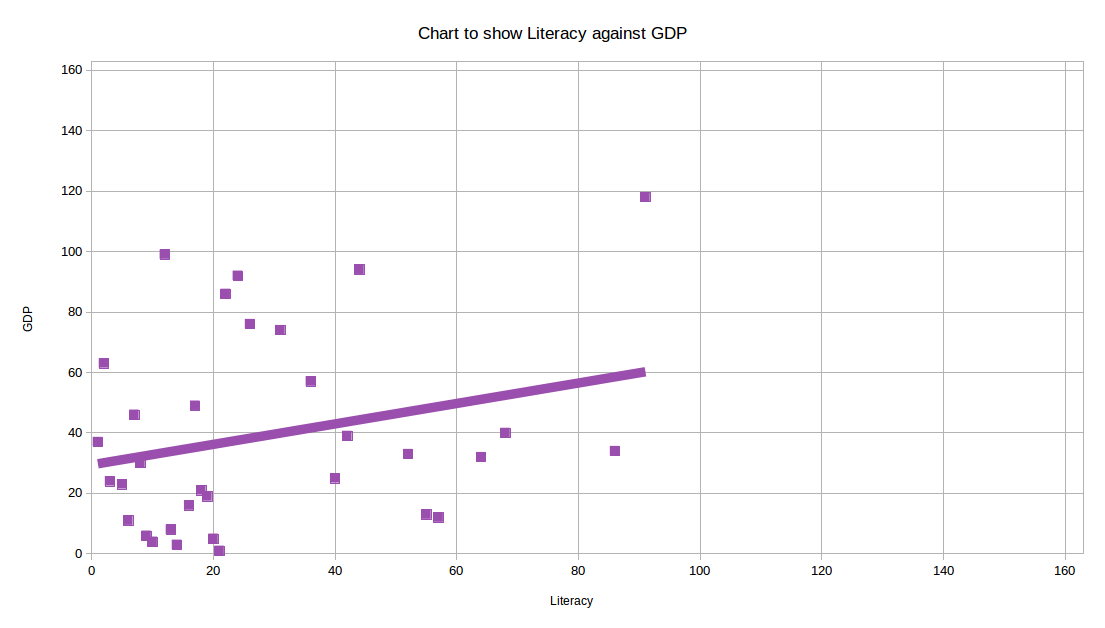 Yes - at least more of one than before. This is the same with GDP per Capita, to a much lesser extent - close enough to nothing that on it's own there is no correlation: 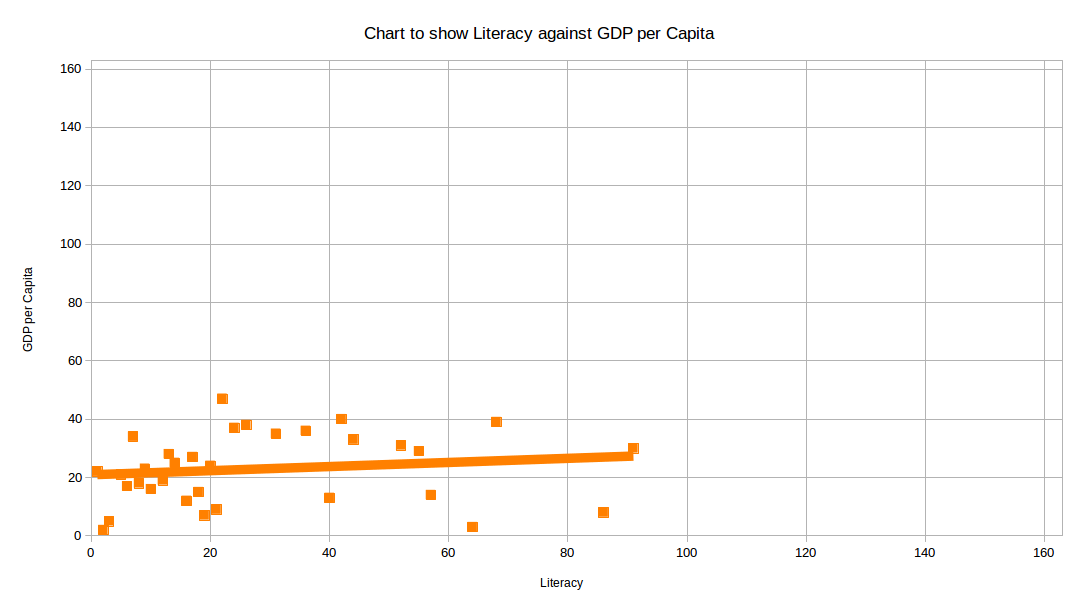 Is there a correlation between Education spending and Literacy rates: 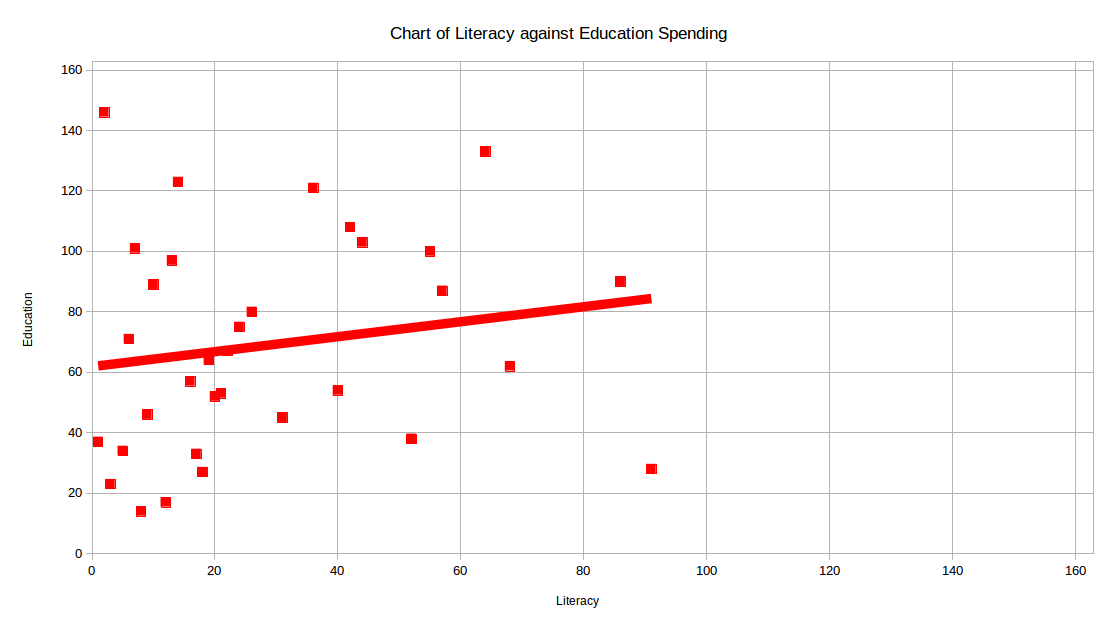 Yes, which makes it strange that Literacy vs GDP per Capita has no correlation. I am unconvinced of any conclusion here.

I think that could be because this is an analysis of Developed countries. A reduce in educational spending now will not reduce GDP for 25 years or more, which makes it hard to determine how education affects GDP.

It would appear that this is confirmed to an extent. Education is needed to get the economy going, but after that additional educational spending really isn't worth it.

All the data is avaliable here as a paste, and here as a .csv.

Have I made any obvious mistakes, is there any additional analysis I should do, and is there any conclusion I should come to from this?

Well, the obvious mistake, to summarize what other answers have hinted at, is that you mistake correlation with causation. All you have is evidence for the former, but you claim the latter. As you're too far to rethink what you're doing, the following won't help you much right now, but it's alternative ways to go in the future.

The best way to go would be to have data on a (quasi-) natural experiment. The holy grail. Policy reforms (despite not really random either) are often taken as the second best. A diff-in-diff based on different education reforms in different local areas (with long-term data to evaluate the results) would be infinitely better than what you have (basically, because what you have is 0).

Another way to go would be to build a theoretical (micro-) model about the connection between growth and education, based on (testable) assumptions. Test these assumptions, use the structure to run the regression. This is how these sort of things are often done in macroeconomics, where the lack of natural experiments has driven people to evaluate theories and connections differently (is this what @EnergyNumbers was hinting at in his comment?)

Chapter 12 of Barro & Sala-i-Martin (2004) "Economic Growth" (2n ed) is an extended example of empirical research related to growth, with a cross-section of countries (in fact they have panel data, but they approach it in a "cross-sectional" way).

They also examine how education affects (or not) growth, using many different variables. The connection appears rather weak.

Since this is a book mostly directed to graduate students, they provide many details on their approach and methodology, so I think it would be useful reading to any one interested in such matters. One will also find many references to research papers.

You're comparing rankings in different categories by testing for correlation. This approach says nothing about causality and has a number of other questionable properties. I'd try tackling the question with actual data and regression models.

Also, if I understood correctly, you're comparing current annual growth to a measure (education/literacy) which, at least in theory, forms over decades, even centuries. With your data and graphs you might argue that some of the current spending on education is ineffective in generating economic growth, but that's about as far as I'd go.

Not the answer you're looking for? Browse other questions tagged gdp economic-growth investment education-economics or ask your own question.