Independence of price and wealth in Walras' Law [closed]

Ask Question
Asked 4 years, 2 months ago
Active 10 months ago
Viewed 218 times
1
$\begingroup$
Closed. This question is off-topic. It is not currently accepting answers.

The following theorem from Mas-Collel, Whinston and Green's Microeconomic Theory (3rd Edition) assumes $\frac {\partial {w}}{\partial {p}}$ to be zero. I would to like to know the reason behind such assumption. 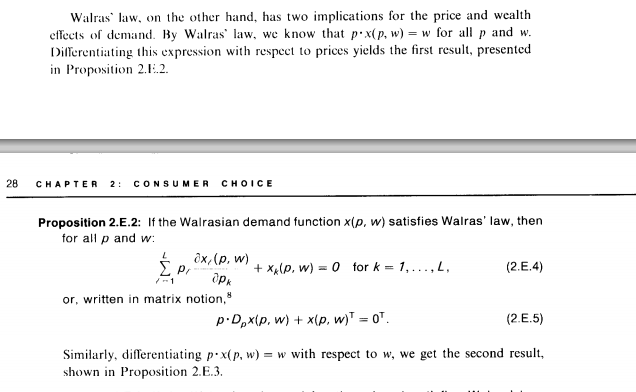 The answer is that $w$, like $p$, is treated as a parameter in this model. It can only be changed by exogenous external forces that are not part of the mechanism included in the model. In contrast, the demand $a$ is a variable that is entirely determined (endogenously) within the model given the prevailing values of the parameters.

Suppose that $p\cdot a=w$. You are correct to think that if we increase the price, $p$, then we break the budget constraint ($p\cdot a> w$). Within the scope of this particular model, only $a$ is variable and therefore the budget constraint must be restored to equality by a decrease in (some elements of) $a$.

Now, the question why is it so is somewhat philosophical because one could, indeed, build an alternative model that includes some mechanism for determining $w$. For example, we could allow consumers not only to buy goods, but also to supply labour and to negotiate wage rates with their employer. Such models exist within the domain of general equilibrium (a basic treatment of which can also be found in your copy of Mas Collel et al.).

However, there are at least a few reasons to think that the model in question is interesting and relevant despite providing no explanation for the determination of $w$:

The demand function $x(p,w)$ is defined for all parameters $p,w$. For example by nonnegativity of demand and the budget constraint $x(p,0) = 0$. The price and wealth parameters can be changed independently of each other as well as together. The answer to your question ends here.

You seem to be describing notion of Slutsky compensation where the consumer receives monetary compensation after the price change so that she can purchase the bundle she would have purchased without the price change. The existence of such a compensation however is not a necessity. If prices rose my salary would still not change (at least for a while), and I would still have a demand function with the new prices and my original salary as inputs.

0
Free Disposal: the production set less the vector space of positive reals
1
Conditions for Radner Equilibrium
1
Difference between social choice function and mechanism outcome function
3
Direct revelation mechanism's sets of strategies and types
2
Why does the price and wealth derivatives, weighted by the price and wealth, sum to 0?