Change in Welfare from an Incentive based Supply Restriction

My question is related to the following graph:

The supporting example is given with regard to a policy of an acreage limitation program to provide incentive for farmers to leave fields fallow.

Why does the cost to the government include all of $D$, and not just the portion of $D$ to the left of $Q_0$?

Incentive Programs In U.S. agricultural policy, output is reduced by incentives rather than by outright quotas. Acreage limitation programs give farmers financial incentives to leave some of their acreage idle. [The figure above] also shows the welfare effects of reducing supply in this way. Note that because farmers agree to limit planted acreage, the supply curve again becomes completely inelastic at the quantity $Q_1$, and the market price is increased from $P_0$ to $P_s$.

As with direct production quotas, the change in consumer surplus is $$\Delta CS=-A-B$$ Farmers now receive a higher price for the production $Q_1$, which corresponds to a gain in surplus of rectangle $A$. But because production is reduced from $Q_0$ to $Q_1$, there is a loss of producer surplus corresponding to triangle $C$. Finally, farmers receive money from the government as an incentive to reduce production. Thus the total change in producer surplus is now $$\Delta PS=A-C + \text{Payments for not producing}$$

(This ended up being a long post, but I find the approach of the textbook a bit outdated).

It is interesting to examine the issue from a (simplistic) game-theoretic point of view.

Assume a fixed (no entry) large number $N$ of small identical producers, meaning that the actions of each one individually does not affect the market. The market demand curve and the market supply curve are common knowledge. For next period, the government wants to restrict production below the current market clearing. The government announces that it will pay an amount $T$ to any producer that respects the deal and restrict his production, on top of the revenue he will earn in the market.

We assume that each producer has to evaluate the following options: either he conforms with the government plan or he doesn't. In combination with either "all others conform", or "all others do not" (here lies one aspect of simplification).

So each individual producer faces four possible future states: 1) All conform
2) He conforms while the rest don't
3) He doesn't conform while all others do
4) Nobody conforms.

The motive to not conform comes from the fact that if he alone does not conform, the market price won't be affected, because he is "small". 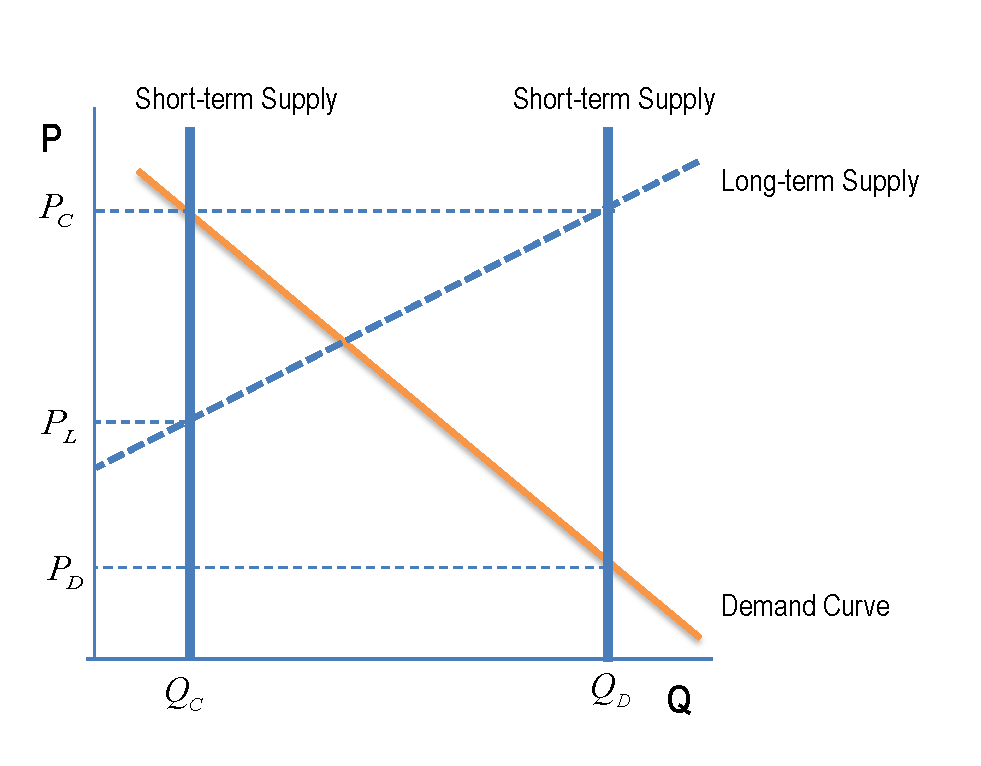 $P_c$ is the price that will prevail if all producers conform to the government plan and produce in total $Q_c$. Correspondingly, $P_d$ is the price that will prevail in the market if each producer attempts to exploit for his own benefit the price hike (each assuming that the others will conform to the government plan). Then the quantity supplied will end up being $Q_d$. Finally $P_L$ is the price which producers would normally want to produce $Q_c$, absent government interference. Note carefully that the long-term market clearing point is out of the picture. Nobody "cares" about it, now that the government jumped in and essentially, reshaped the market structure in terms of the market's prospects.

Then, the game in normal form as experienced by each individual supplier is ($q$ is just $Q/N$)

Note the reason why the lower left corner has a payoff of $0$: if the producers produces $q_d$ and receives a unit price $q_c$, he is on his zero-pure-profit, best-response function -nothing is gained on top (so we do not ascribe any benefit to "be larger" in terms of revenues).

It should be clear from the above payoff matrix that "I conform" is already a pure dominant strategy without the need for any strictly positive government incentive $T$.

What I am (momentarily) saying, is that the Government needs only to announce the program, with a "token" incentive $T$, and everyone will conform to it. Essentially the government functions here as a "cartel creator", bringing all suppliers to cooperate in a decentralized manner in order to restrict quantity and increase price.

Well, it doesn't sound as a very convincing description of reality, does it? "Token incentive programs" do not appear to work in the real world. So something must be critically mistaken in our assumptions.

And it most probably is: the assumption that a producer does not care about his scale of production. This neglects the fact that especially with small producers "costs" include their reward for their own labor and use of their own equipment. So a higher scale of operations does increase the income of the producer, even though it may not bring "pure profits" over and above the remuneration of the production factors.

So let's approach the construction of the payoff matrix in a different way. Assume that "all other costs of production" except the producer's own income (like materials, third-party services, additional laborers, etc) are constant per unit of output, denote it $b$. Then the producer income is $I = (p-b)q$.

The payoff matrix in terms of income becomes now

We can reasonably argue that $P_d<b$ and so without the government incentive, Income in the right column will be negative. Note that here "I conform" is already dominant if all others deviate, because losses are smaller.

This is essentially "the cost of avoiding treason". In order to deal with loss-aversion we could also argue that the government will guarantee "no-loss". Then the government incentive should be

Not the answer you're looking for? Browse other questions tagged welfare producer-surplus or ask your own question.