First, is this true?

Second, if you find it to be true, why doesn't the minimum wage increase substantially more than it has over the years (focusing on the US)? What is the counter balancing force that causes minimum wages to seek equilibrium at some something between "poverty" and "living wage" level (again, in the US)? Or is even that assumption false?

How is the minimum wage determined?

Yes and no. It is a political choice, but with economic reasoning. In the end, that's the case for every economic rule, maybe with the exception of monetary rules, as we try to preserve independence for central bankers (but it isn't completely true for the US FEDs).

When setting the new minimum wage, you compare minimum wages with other states, and with your own (earlier) state, to get a feeling what's possible and what is not. In the end, the minimum wage is a trade-off between raising earnings for some parts of the population, and decreasing employment chance for others.

How does the minimum wage affect employment?

The degree of trade-off (if you will, the transition rate between the two) is unclear. In the data, we tend to see no employment effect of minimum wages, but an increase in earnings (Dube et al (2010): (Ungated version). In fact, we see a large number of estimates around 0: 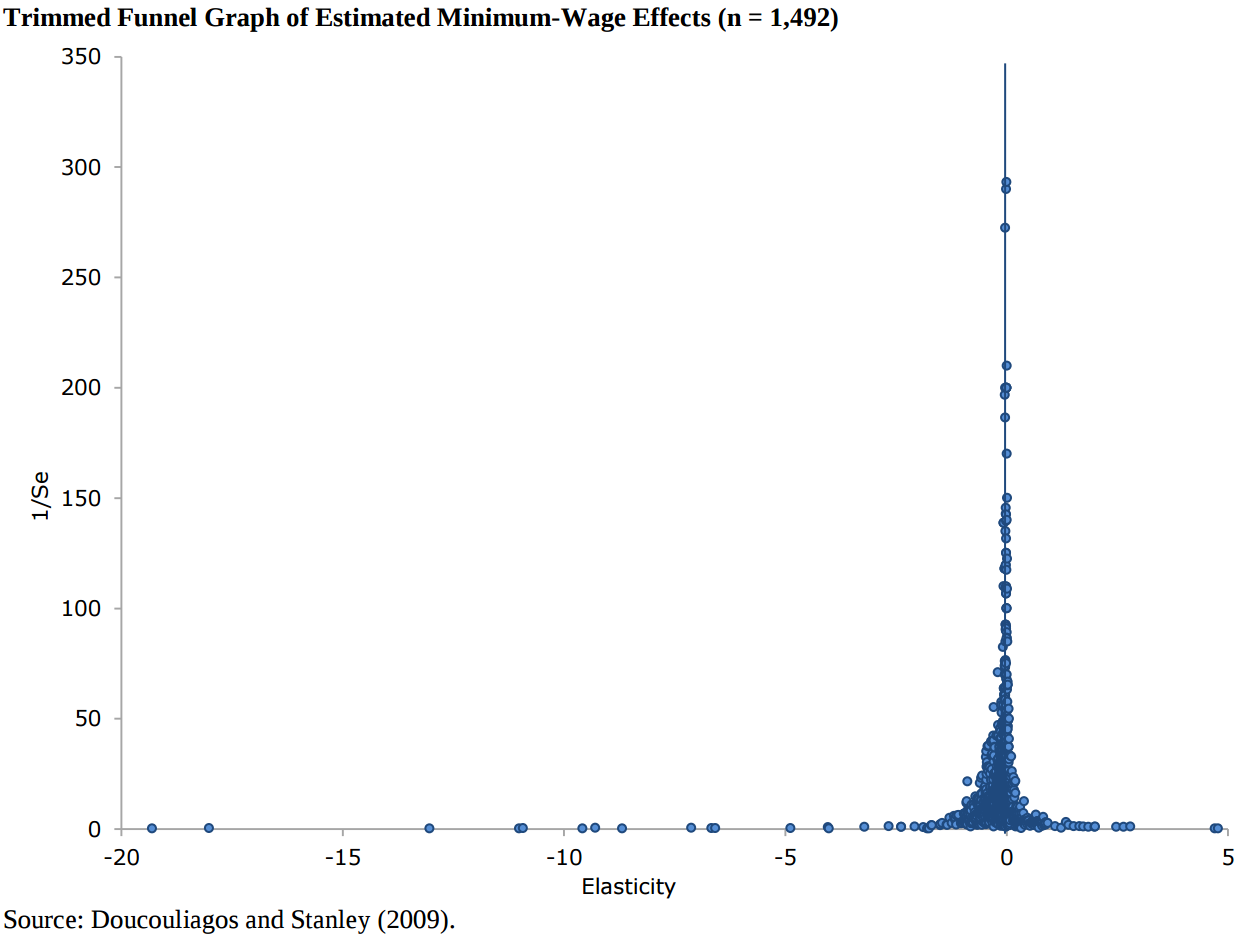 Many economists suspect (based on a strong prior that there should be an employment effect) that this is due to poor data (Matt Rognlie's comment), or long-term effects of minimum-wages (adjustment costs in technology) that we are not capable of measuring/estimating precisely (Sorkin (2015) (IDEAS)).

The counter-effect to some part is the political process. People are not stupid, they will accept raises in the minimum wage to some degree, but not if you go bananas. Also, there are natural counter-forces in the economy:

Have a look at the following graph, which depicts the relative impact of minimum wages. The author plots the maximum of minimum wages at a time period, deflated by average hourly wage in the private sector among production and non-supervisory employees (no managers). It really looks as if any spike (raise in the minimum wages) gets deflated quite quickly, doesn't it? 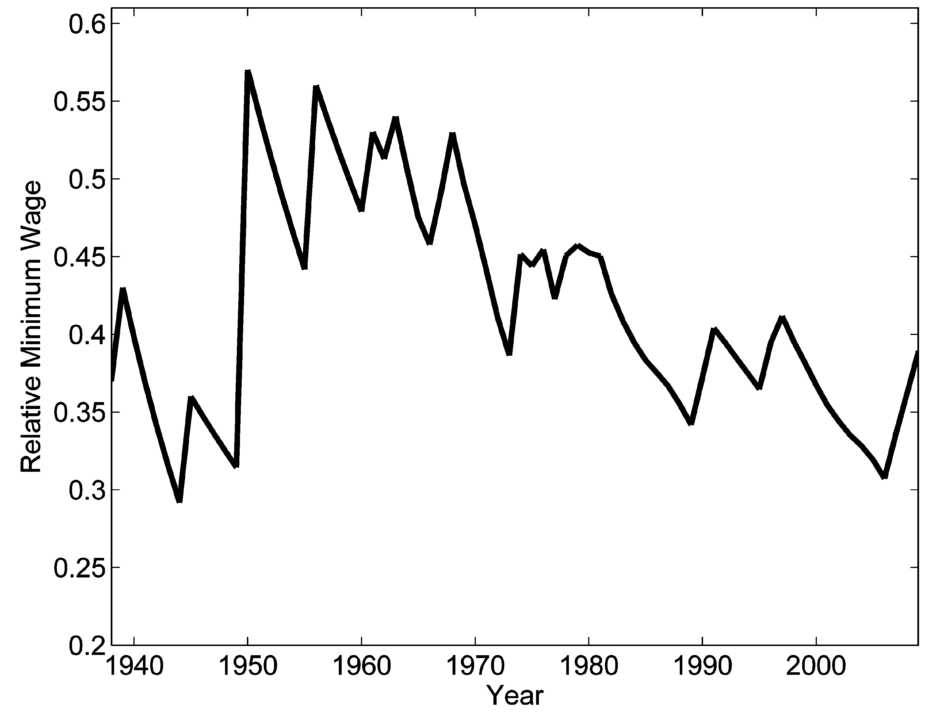 While business owners are generally united in their stance against minimum wage increases, wage earners do not always prefer a wage increase. Minimum wage puts pressure on the least productive workers and puts them at a threat of being fired. For example, if a worker produces 10 dollars of revenue for the business owner, but costs him 7.50 dollars an hour, then everything works fine for both of them. If the minimum wage is increased to 11 dollars an hour, then the business owner will simply fire the worker. That is not something the worker would prefer. On the political front, businesses are usually outspoken about their intentions to lay off people in case of the minimum wage hikes. Political parties are also aware of a possible spike in unemployment resulting from minimum wage hikes. If the economy is heavily reliant on low-skilled cheap workforce, an excessive minimum wage hike would be disastrous for its growth.

Also, developed and highly competitive economies, like the US, have a good portion of voting age population working for a monthly salary, which is usually way above the minimum wage. These salary-earners are consumers of goods and services produced by wage-earners, so they are generally against increases to minimum wage.

It's interesting comparing how limited minimum wage increases are compared to how often we see price ceilings for housing (rent control). For the minimum wage, there is arguably a shortage of labor demand, and for rent control, there is a shortage in housing supply that results.

Thing is though, for the modest minimum wage increases we have seen, we haven't seen much of a fall in unemployment in the United States. I take the neoclassical argument for explaining this: Firms can push wages below the equilibrium because they know the worker is more averse to quitting that the typical large firm is averse to losing one worker. The search costs of finding a new job may very well prevent a worker from finding a better paying job. The minimum wage could be a correctional tool for that (albeit a very awkward one). Generally, a minimum wage of around 40-50% of the median wage in a country will not have significant negative effects on employment.

Politicians can shape popular opinion on many different fronts, not just minimum wage. So if they were to decide moving the minimum wage were harmful, they might be willing not to raise it and just gain their public mandate somehow else, especially if a political position is seen as someone who is entrusted with political decisions rather than being trusted to represent the aggregate of their constitutents (senate vs. house of representatives).

As for housing control though, we do see clear housing shortages whenever rent control happens. It gets passed through a lot more because you can see homelessness when it happens. You can take pictures of that sort of thing. Not so much with minimum wage, at least that's what I figure.

Not the answer you're looking for? Browse other questions tagged macroeconomics labor-economics unemployment minimum-wage or ask your own question.

41
What is the economic purpose of increasing the minimum wage?
3
Should minimum wage be regulated for developing countries
8
Effect of minimum wage on higher levels of pay
5
Minimum wage vs wage subsdies
6
Minimum Wage effects on Adjacent Cities
6
Instrumental Variable Paper for Minimum Wage
1
Can the theory of the second best mathematically justify labor unions in some scenarios?
0
US minimum wage beyond $15 per hour