What is the difference between marginal cost and average cost? [duplicate]

Suppose initially there are no fixed costs.

What does it mean to take an average?

What does marginal cost tell me?

Thus, this concept is a bit trickier because it involves a continuous amount of TV and the cost per infinitesimal unit changes as you buy more. So you really can't just consider how much $MC(1)$ is and $MC(2)$ is. You are considering it for some infinitesimal additional amount $dy$ at a given point (e.g. $y=2$). The trend is easier to think through if you don't restrict yourself to integers. Note, we are assuming you can have noninteger quantities of goods, otherwise we wouldn't be working in $\Bbb{R}^n$ and the integration later might be trickier.

So suppose I want to buy $5$ TVs. For the $k$th TV purchased, the $$MC(k)= 3k^2$$ Going back to our example above, let's now suppose $k \in [0,5]$. To find the average cost, we simply do the addition formula used above for the 5 TV example, except now summed over each infinitesimal amount (of which there are an infinite number). This gives us

Hyperbolic Behavior of AFC with y >0

How does AFC affect AC?

Without specifying $VC(y)$, we cannot know the behavior of $AC(y)$ as $y$ moves away from $0$. There will be some $y_{0}$ such that, for $y > y_{0}$, $AC(y)$ can essentially be anything. Of course, as $y \rightarrow 0$, $AC(y) \rightarrow \infty$. This is because AVC cannot be negative and so we are guaranteed any variable costs will not lower the average cost below AFC. Therefore, $AVC \geq 0$, so since $AFC \rightarrow \infty$ as $y\rightarrow 0$ (remember it is a hyperbola), thus AC must go to infinity as well.

AC and AVC can't be exactly equal for $FC>0$

AC and AVC can't be exactly parallel for $FC>0$

This means by quotient rule

Why do we define the firm's longrun shutdown point in terms of average cost not marginal cost?

I am not defining the behavior of $p$ here or who controls $p$. I am just considering for what $p$ will the firm shut down, and ignoring everything else because it's irrelevant.

Does average cost necessarily equal marginal cost at some point?

Does average cost necessarily equal marginal cost at some point?

Yes, if the Average Cost function has an interior stationary point.

Considering the derivative of the Average Cost function with respect to quantity, we have

If the Average Cost function has such a stationary point (i.e. where its first derivative equals zero), will it be a minimum?

Denoting $C''$ the 2nd derivative of the total cost function, we need

The Total Cost Function must be convex at the stationary point, for it to represent a minimum for the Average Cost function.

At that point, the second derivative of the Total Cost function is $C''(y^*) = 6y^* >0$. So for this Cost function there is a point where Average Cost is minimum, and where it equals Marginal Cost. The Diagram is 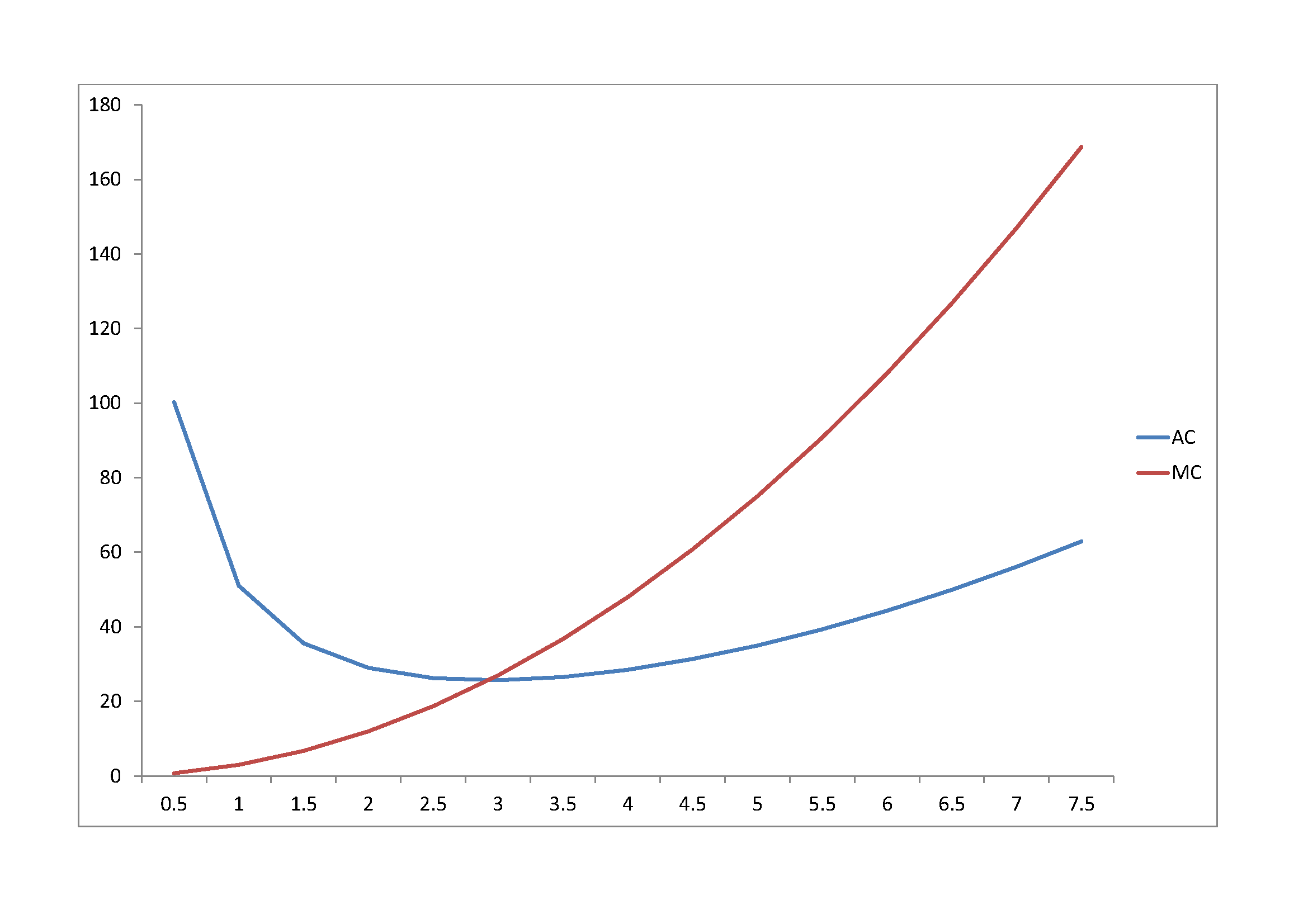 Indirectly, the thing to remember here is that the nice $J$-shaped curve for the Average Cost function is most easily produced if we allow for fixed costs and a convex Variable Cost.

Not the answer you're looking for? Browse other questions tagged cost or ask your own question.

1
What is the difference between average cost and marginal cost?
2
Where do I find the US GDP growth on FRED?