I have a example of supply and demand. If there is a regulation that requires customers to pay additional tax when they purchase cigarettes, would supply or demand curve shift? I know that tax/subsidies is one of supply's non-price determinants, however, it is only applicable to producers. I doubt that this example is concerned with demand curve. Nevertheless, tax is not one of demand non-price determinants. Thanks!

As stated by @Wecon, the demand curve will shift down.

It is two different things to determine which curve will shift and who will actually bear the burden of the tax.

To answer the later problem, we need to look at price-elasticity of supply and of demand. The most inelastic (that is, the curve the most vertical) will bear the higher weight of the tax.

Here is an example with a fairly elastic supply curve, and a rather inelastic demand curve (forgive my drawing skills). 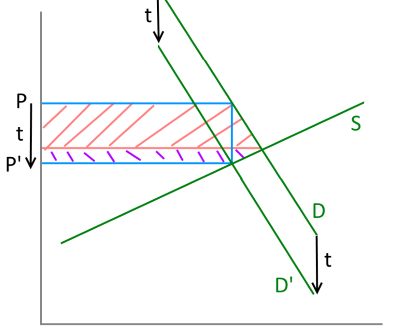 The variation of the surplus of each agents is quite telling : in ugly-rose, we can see that the consumers, who have an inelastic demand, loose a lot, actually most of the total loss of surplus. In the opposite, the purple area represents the producer's loss of surplus, which is smaller than the consumer's.

If the supply is inelastic and the demand elastic, than the roles are reverse, the producers ending up bearing a heavier part of the tax.

If the tax is imposed on the suppliers, then the prices will be the same: the consumers will still pay $P$ and the suppliers will pay the tax, thus receiving $P'$

In short: no matter to whom you impose the tax, the elasticity allocate its burden to the agents. The economic incidence of the tax and its legal incidence are distinct concepts.

In partial equilibrium, demand shifts down, with the (vertical) distance between the pre-tax and post-tax curve being exactly the height of the tax.

It depends on how competitive the taxed product is and its cost of production. In some cases, the seller can not pass the entire tax onto the consumer and the seller have to swallow some of the tax by lowering prices. This would be common in monopolistic industries with low variable costs as their prices tend to be already maxed and can not go higher (such that the volume lost would not offset the higher markups).

Take oil for example. Say gas sells for 10 dollars a gallon in state A and state B which are next to each other. State B adds a gas tax of 1 dollar per gallon. If stations in state B charge 11 dollars a gallon than customers will go to State A to fill up. This forces state B stations to lower the price and eat the cost of the tax. In such a scenario this has not really affected the demand curve.

4
Basic microeconomics: supply, demand and substitutes in production
6
Establish demand curve with infrequent sales
1
What does an individual's demand function describe?
1
When a tax is imposed on the sellers, the price of the good rises. So, why doesn't the demand curve shift?
1
Can Direct Taxes on the consumers have a impact on the Demand (rather than supply)?
3
By what means do prices change?