What is the difference between VAT and corporate tax

Many times I hear that VAT (value added tax) is a "good" tax, while corporate tax is a "bad" tax/ However, both taxes take a cut from the difference between the income of a company and its expenses, and seem therefore to be economically equivalent. Can anybody explain the difference to me?

Both taxes take a cut from the difference between the income of a company and its expenses.

Wrong. Companies collect VAT as though they were tax-collectors on behalf of the state. This is why the amount of VAT that a company pays to its suppliers' is subtracted from the VAT that the company has collected from its customers, and only the difference is paid to the State.

As to whether they are "good" or "bad" taxes, and which is which, as usual it is a complicated matter (and when you read/hear such assertions, make your eyes or ears walk away), a matter that has to do not only with businesses but with the macroeconomy as a whole, while it also depends on the current state of the business cycle, whether there is a depression, etc.

ADDENDUM
Responding to the comment by the OP to this answer, here is a schematic view of the matter 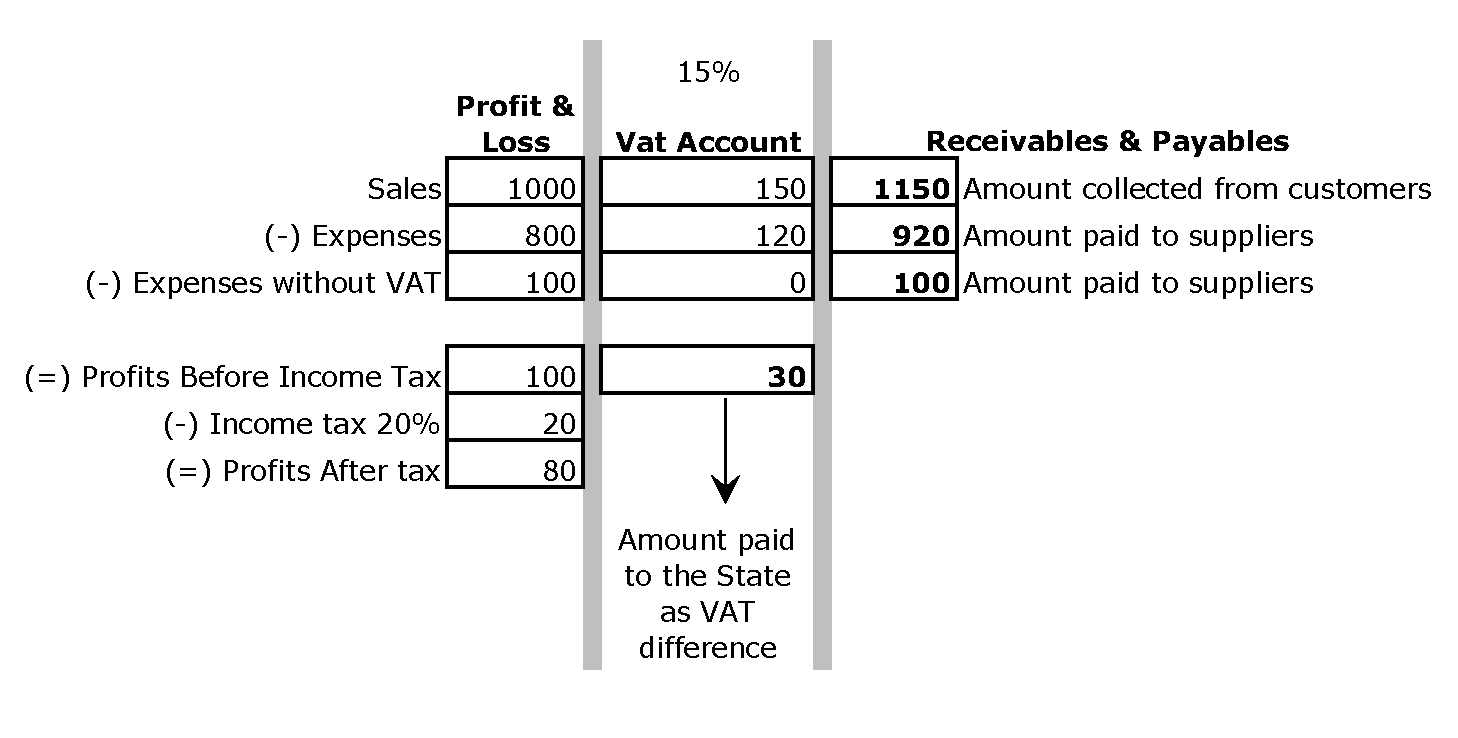 V.A.T is not part of the Revenues/Sales of a company. It is a tax imposed on consumers, and collected by the company on behalf of the state.

Imagine a situation without V.A.T., i.e. assume that currently only the first column of the above exists. Then V.A.T. is enacted into tax law. The Profit and Loss statement of the company will not include it, neither in the Revenues side, nor on the Expenses side, it remains unchanged. The amount collected from customers goes up, but the Revenues of a company don't. And if among the company's customers are other companies, they will not see VAT as an increase in cost, because they will get to offset what they pay with what they collect from their customers. In other words, V.A.T is a tax imposed on final private consumers, and everybody else is involved as a tax-collecting entity only. Note that V.A.T is charged and collected irrespective of whether a company has profits or losses.

In a very general sense, all taxes are "equivalent" in the sense that they have the same goal: bring part of output under the ownership and control of the state. But it matters greatly how do they affect the "before-the-State" economy. In this particular case, V.A.T makes products more expensive for final consumers, and it is about how they will react to these increased prices. On the other hand, Income tax cuts directly from a company's profits, if profits exist, and so it affects the incentives of businesses to go into business.

A significant difference is who ultimately pays the tax, i.e. its incidence. This is more straightforward in the case of VAT, which is ideally(*) and usually(**) and paid by consumers... which also means the VAT is a regressive tax; some recent historical analyses found that (the introduction of) VAT tends to increase some measures of inequality, but not others. Don't be fooled by the fact that (developed) countries with high VAT usually have good social nets. The two issues don't necessarily go hand in hand as the more obscure cases of Bangladesh or Croatia illustrate.

(**): There is something to be said about VAT cuts, which are often not passed on to consumers much.

As for VAT being a "good" tax, that depends on whether you agree with its premises and effects. One that I didn't (yet) mention, but is also central to VAT design (also p.20 in James' book) is that "Efficiency trumps in the efficiency-equity trade-off when designing taxes". This actually goes hand-in-hand with the target tax base because "Consumption is a less mobile base and therefore a more efficient and reliable base than income, especially highly mobile capital income".

The incidences of the corporate taxes is a more difficult topic. It's generally accepted that in a non-closed economy capital and labor share the corporate tax. The relative weights seem to depend on the relative mobility of labor vs capital. But clearly it has a different incidence than VAT.

Generally speaking, people who label consumption-based taxes good and (corporate or personal) income taxes bad have taken a fairly extreme position in the income-vs-consumption taxes debate. As for the mostly theoretical debate on the either-or matter:

a primary goal of the income tax historically was seen as redistributing wealth from the rich to everyone else. This explains why it was first adopted in the United States, and it also explains why the income tax is persistently maintained today in developing countries that could satisfy their entire revenue needs by the VAT. Even though the personal income tax in these countries has a spotty record, they insist on maintaining it because of its symbolic potential in achieving redistribution [...]

From a welfarist perspective, it then is argued, wealth can have value only when it is consumed--otherwise, as Daniel Shaviro has stated (and as Bankman and Weisbach repeat), it is merely the same as Monopoly money, and of no real value. Once this premise is established, it becomes easy to "prove" mathematically that a consumption tax is just as good at redistribution as an income tax (although this is only true for those types of consumption tax that are imposed on all consumption; prepaid consumption taxes like the flat tax do not reach economic rents, and therefore do not tax all consumption)

Opponents of the consumption tax sometimes have argued (following the lead of Henry Simons) that unconsumed wealth is an independent source of welfare to the individuals who possess it because it confers security, political power, or social standing. Bankman and Weisbach argue that these types of intangible benefits also flow ultimately from consumption value and are reduced by taxing consumption. I am not persuaded, since the super-rich will never consume most of their wealth, so it is hard to see what motivates them to accumulate it if the only value of wealth is in consumption. This debate within the welfarist tradition will doubtless go on

3
How does corporate income tax apply?
3
Abenomics and the Japanese VAT tax hike
3
Who really pays transaction taxes like VAT or sales tax?
0
Why do we have VAT on (most) services?
0
Is there an index, parameter, ecuation, or anything to compare the tax pressure exercised by a country in relation to others countries?
1
Could a carbon tax be a substitute for VAT?
1
What's the economic argument (if any) for taxing dividends as ordinary income?
3
What is the different between a Sales Tax and a Value Added Tax?