In this book, page 202, the authors develop the idea that when the central bank increases the interest rates to get the CPI inflation back to target inflation, it will not necessarily cut off an eventual house price bubble, or the financial accelerator. And to justify this assertion, in a footnote they state: «The elements of housing costs included do not influence the overall price indices that enter the inflation target to a high degree. To see this plot the US Consumer Price Index against the US Consumer Price Index less Shelter(Data available from US Bureau of Labor Statistics)». (What I understand from this is that since the housing related costs that enter into CPI computation are negligible, the central banker will perceive an inflation different from what if it included housing prices directly. Did I understand correctly?)

So, I plotted the graph.

I included an extra series, "All items less Food". It behaves exactly like the CPI.

How can I deduce from the graph what the authors of the book are saying?

Here's what the Bureau of Labor Statistics' FAQ has to say on CPI and housing costs:

Q: The CPI used to include the value of a house in calculating inflation and now they use an estimate of what each house would rent for -- doesn't this switch simply lower the official inflation rate?

A: No. Until 1983, the CPI measure of homeowner cost was based largely on house prices. The long-recognized flaw of that approach was that owner-occupied housing combines both consumption and investment elements, and the CPI is designed to exclude investment items. The approach now used in the CPI, called rental equivalence, measures the value of shelter to owner-occupants as the amount they forgo by not renting out their homes.

The rental equivalence approach is grounded in economic theory, receives broad support from academic economists and each of the prominent panels, and agencies that have reviewed the CPI, and is the most commonly used method by countries in the Organization for Economic Cooperation and Development (OECD). Critics often assume that the BLS adopted rental equivalence in order to lower the measured rate of inflation. It is certainly true that an index based on home prices would be more volatile, and might move differently from other CPI indexes over any given time period. However, when it was first introduced, rental equivalence actually increased the rate of change of the CPI shelter index, and in the long run there is no evidence that the CPI method yields lower inflation rates than some other alternatives. For example, according to the National Association of Realtors, between 1983 and 2007 the monthly principal and interest payment required to purchase a median-priced existing home in the United States rose by 79 percent, much less than the rental equivalence increase of 140 percent over that same period.

Ordinarily, because people can substitute between renting or owning a house, the price of a house should broadly reflect its rental value (e.g. if it were much cheaper to rent than to buy then people would stop buying and start renting until prices 'equalised'). However, if a bubble is being driven by speculation on future house price increases then it is likely that house prices will become decoupled from the long-run rental value of a house. You can see what this looked like during the last housing bubble in the below figure. It can clearly be seen that house prices (the blue line) were not well-reflected by the owner-equivalent rent included in CPI. 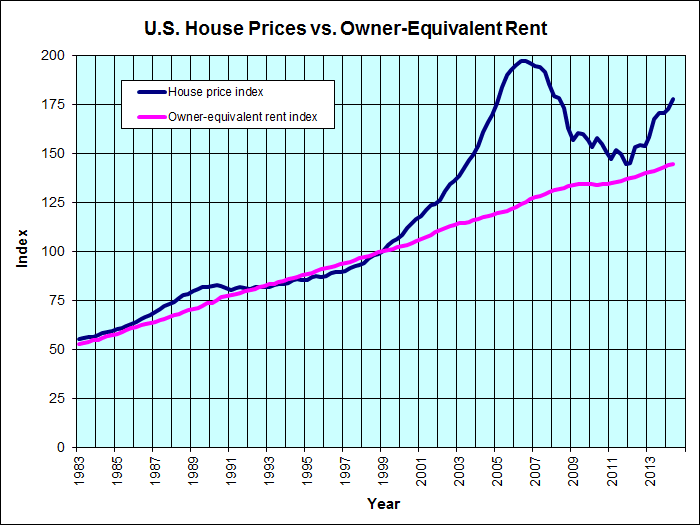 To me, it sounds like the book is making a it known that home prices can affect the way CPI is calculated in a way that it does not accurately represent what the CPI is out to track and show. For example, the cost of tooth paste is pretty much the same from Maine to Las Vegas. But home prices vary from region to region and depending on the time of year and tons of other factors. Because of that, home prices behave in a way that they cannot be trusted when calculating CPI.

Not the answer you're looking for? Browse other questions tagged macroeconomics inflation or ask your own question.

2
Does the amount of inward investments affect inflation?
31
Why aren't house prices included in CPI?
1
How does inflation in income go 'hand in hand with inflation in prices'?
5
Is it possible for a Central Bank to escape from a deflation trap by 'hiding' information?
0
How does inflation affect the value of savings?
1
Inflation , Housing Prices, Is there some form of the CPI that can include Home Prices?
0
What caused "excess liquidity" in equity market, when CPI was deflationary at the same time period, which caused 'market crash in 1929' in USA?
1
From the aggregate supply equation to the definition of inflation rate
0
How would inflation in the U.S. affect dolarized countries