This is in reference to the Game theoretic concepts as Nash equilibrium refinements. Sequential equilibrium are often defined as satisfying two conditions: consistency and sequential rationality. Whereas Weak Sequential Equilibria (sometimes referred to as Weak Perfect Bayesian) also necessitates sequential rationality, but has a weaker consistency requirement,which is my main source of confusion. Moreover, SE and WSE(WPBE) are often coincide as sets of solutions which really only adds to the frustration of trying to differentiate these almost identical concepts. My main question is, how would I go about checking the consistency requirement for a given extensive form game?

Let's review the definitions of the two concepts. Let $\sigma$ be a profile of strategies and $\mu$ a system of beliefs.

A pair $(\sigma,\mu)$ is a weak perfect Bayesian equilibrium (WPBE) if

A pair $(\sigma,\mu)$ is a sequential equilibrium (SE) if

From the definitions, we can see that the two concepts differ in their restrictions of beliefs: WPBE requires beliefs to be consistent with Bayes rule whenever it is applicable, and places no restriction on cases where Bayes rule does not apply (as when an information set is reached with probability zero). In contrast, the consistency requirement imposed by SE forces Bayes rule to apply everywhere in the tree by demanding that the SE-belief is the limit of a sequence of beliefs derived from a profile of completely mixed strategies.

To illustrate, consider the following example of market entry game. The entrant first decides to enter ($I$) or stay out ($O$), and if entered, the entrant (E) and the resident (R) simultaneously choose whether to fight ($F$) or abstain ($A$).

The equilibrium where entrant chooses $(O,\text{$A$ if $I$})$ and the resident chooses $F$, together with the resident believing that the entrant will choose $F$ when entered constitute a WPBE. Clearly the resident's belief is wrong, but that is allowed in WPBE because the information set at which the resident makes his decision is reached with probability zero. Thus Bayes rule does not apply, and he is free to have any belief.

SE will not allow this to happen, because as soon as $I$ is played with a positive (albeit tiny) probability, Bayes rule applies at the resident's information set, and given the entrant's strategy, the only consistent belief is to assign probability $1$ to the node after $A$. Thus the strategy profile $((O,\text{$A$ if $I$}),F)$ is not a SE. 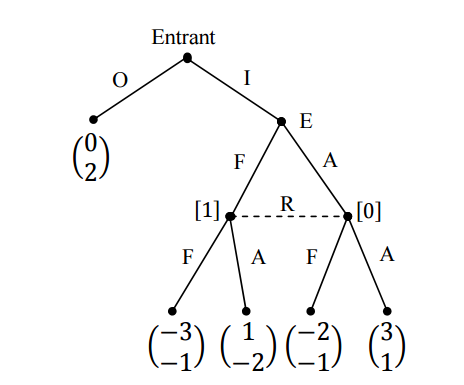 Therefore we have the following theorem relating SE and SPE (subgame perfect equilibrium):

Not the answer you're looking for? Browse other questions tagged game-theory nash-equilibrium extensive-games or ask your own question.