In the course of my research I have been examining these days macroeconomic time series for per capital household consumption, using the databank of the WorldBank. The unit of measure was constant 2005 USD.

I got all shorts: smooth upward trends indicating a steadily increasing material well being on average; series with wild swings indicating socioeconomic turmoil, civil wars, coup d'eta's etc; series with an obvious structural shock in the level which then continued to grow at the same rate (for example Finland experienced such a shock when the Soviet Union collapsed); series suspiciously smoothly increasing, too smoothly to be believable and so suspect of being fake...

Unique among them, was Madagascar: its per capita consumption exhibited a steady downward trend for the period 1971-1996, although after that period the trend seems to (gradually) flatten out. Here is the plot: 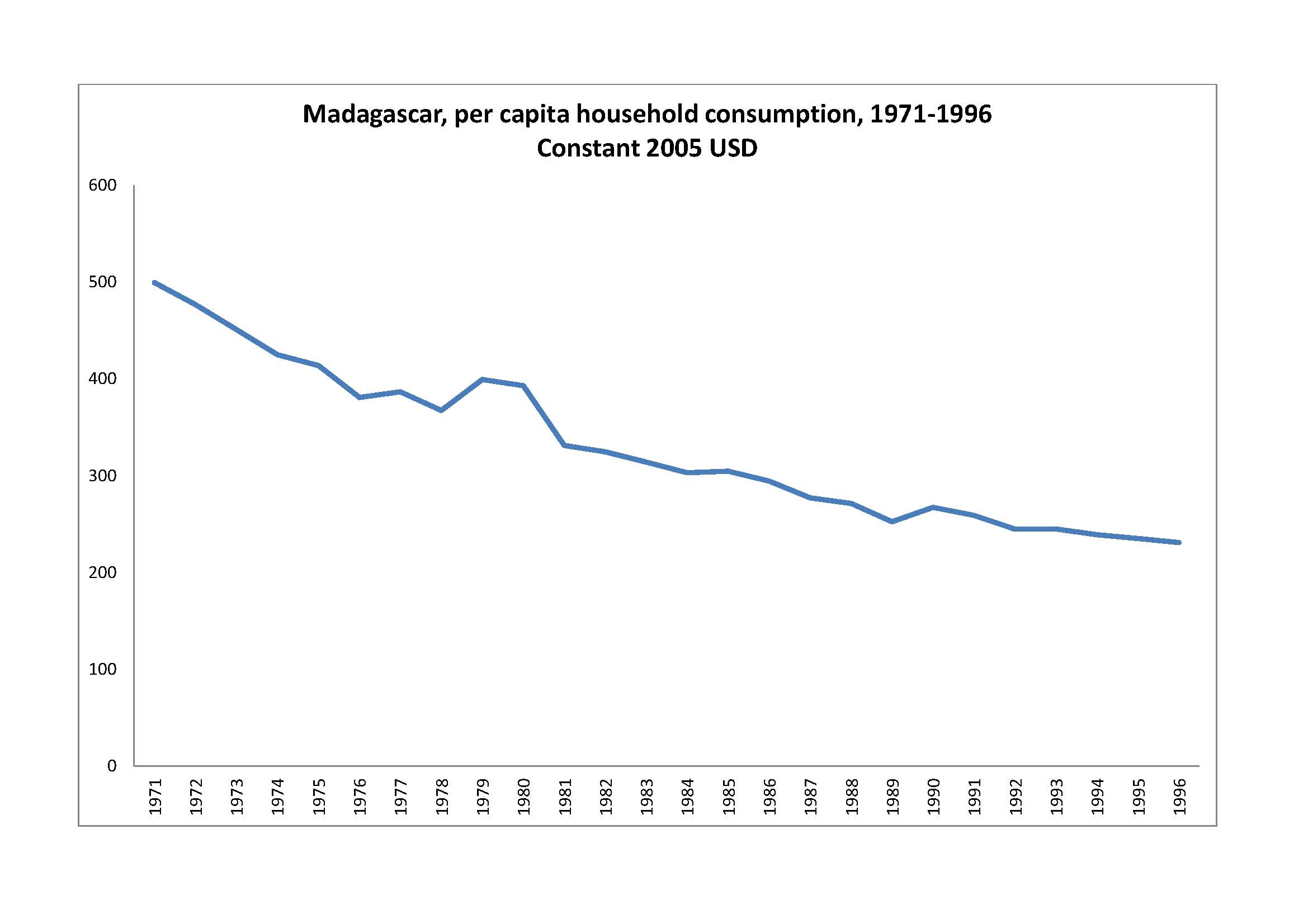 Again the unique feature here is the almost constant downward trend. There were other countries that saw their consumption level collapsing in this period, but not in such a steady gradual manner, over a quarter of a century.

Does anybody have a clue as to what was happening in the period in this country? Madagascar was colonized by France in 1896 and obtained full independence in 1960. But of course there are many countries that were colonies and de-colonized around that period; none exhibited such behavior.

I think I have found the explenation for this. If you look at the wikipdedia page of the economy of Madagascar, it states the following:

The standard of living of the Malagasy population has been declining dramatically over the past 25 years. The country has gone from being a net exporter of agricultural products in the 1960s to a net importer since 1971. Inappropriate traditional agricultural methods cause soil to erode and soil quality to decline, and the basis of survival for Madagascar’s people is under serious threat.

The source of this claim is Deutsche Gesellschaft für Internationale Zusammenarbeit.

Now, if you look at the world bank figures on agriculture in Madagascar, you can see this declining trend. For example the Agriculture value added per worker (constant 2005 US$) declines between 1980 and 2014 from 250.1 to 175.8.

Since Madagascar is a country which relies heavily on agriculture (about a quarter of its GDP stems from agriculture), this declining trend influences the whole of this economy.

Not the answer you're looking for? Browse other questions tagged macroeconomics consumption or ask your own question.

12
Why must the rate of GDP growth be positive?

1
What are some of the economic arguments for gender-neutral marriage?
3
what was the world's wealth in 2015?
2
True or False: During the Japan Bubble, one sky scraper in Tokyo was worth more than the entire state of california?
0
Did real interest rates decrease during the Great Recession
3
What was the Rogoff & Reinhart spreadsheet mistake?