How is Singapore able to provide first-world public services, given its low income tax rate?

Despite, this Singapore is well known for its first-world public services, including public transportation, education, security, public housing and utilities. Personally I've lived there and I enjoyed the level of public services that otherwise can only be observed in countries with much higher taxation than 4% (e.g. United States, Canada or Western European countries) or countries that rely on oil revenues thus eliminating the need for taxation (e.g. Gulf countries). I don't know how to prove this with hard data, but taking a cursory look at International rankings of Singapore can probably convince you that this is the case.

How is this possible? Absent 'free revenue' such as oil, isn't high level of taxation necessary to fund such high level of public service?

I'm not an expert on this, but as a Singaporean, here are some factors off the top of my head (plus some Googling), explaining why Singapore is different from other first-world countries (in terms of revenue and expenditures). 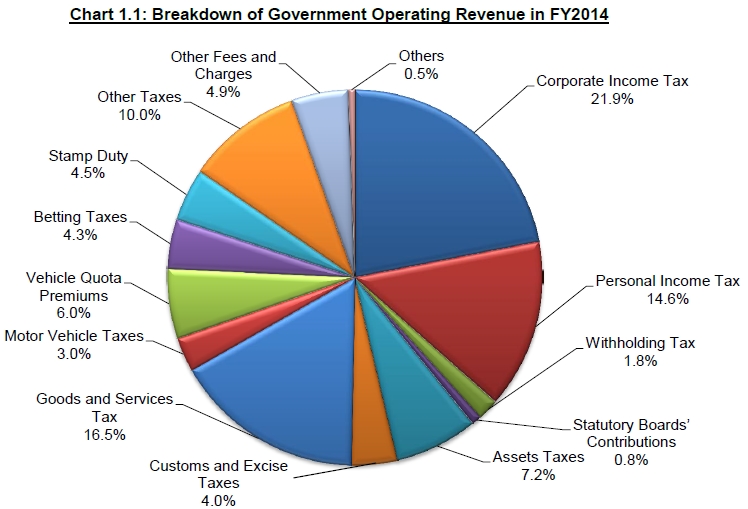 These COEs ("Vehicle Quota Premiums") make up 6.0% of government revenue.

Besides this very expensive piece of paper, a car-owner still has to pay all the other usual taxes (GST, road taxes) and insurance, plus a lot of unusual fees (e.g. Electronic Road Pricing - an idea which London borrowed). A lot of these flow to government coffers. Together, these make Singapore easily the most expensive place in the world to own cars.

It is true that over 80% of Singapore residents live in government housing (HDB flats). But these are not the sort of heavily-subsidized public housing you have in some Western countries. Indeed, it is a frequent gripe amongst Singaporeans that these are incredibly expensive and there are often conspiracy theories that the government sometimes actively works to push up prices.

Given the lack of transparency and also the fact that Singaporeans are actively encouraged to use their CPF (retirement) savings to pay for these homes, these conspiracy theories are not without merit.

There are some subsidies for first-time Singaporean home-buyers: If both you and your spouse are first-time buyers, then you get a total subsidy of S\$30,000. But this is not a large subsidy.

Some exceptional hardship cases (which involves an elaborate application process and onerous requirements) get to rent a small one-room flat for extremely cheap (as little as S\$26 a month), but these cases are so few in number as to be negligible.

Unlike in say some US cities, where public transport is always losing money, public transport in Singapore ALWAYS makes very healthy profits. So these are not drains on but rather contributors to the government coffers.

This is another frequent gripe of Singaporeans because these savings are all locked up (with very draconian rules on how you can gradually withdraw small amounts after you're 55).

Moreover, these funds are "managed" by the various Singapore sovereign wealth funds (GIC, Temasek). GIC in particular is not well-ranked in terms of transparency (source). So it is unclear as to how and how much exactly these help to contribute to Singapore government coffers.

I have heard some of my friends who work at the Ministry of Health (Singapore) complaining about how inefficient the Singapore health care system is.

But as someone who has lived in both Singapore and the US for a good number of years, I would say (based purely on my own anecdotal experience) that the Singapore healthcare system is extremely efficient, especially if compared to the US. But the US is perhaps the worst-case scenario. I'm not sure how Singapore would compare to other first-world countries.

Income tax is not the only taxation.

And taxation is not the only source of revenue that pays for those services.

You have to look far beyond income tax rates.

So don't forget to take into account all the other taxes, public transport fares, supplementary health care costs, other payments (at point of use or elsewhere), as well as any other revenues from trading by state enterprises, including profits from the Sovereign Wealth Funds (GIC/Temasek/...).

Government's sources of income does not comprise solely of income tax, but includes:

According to global economy.com government spending in Singapore is about 10% of GDP. So absent of taking debt the overall tax rate would have to be the same. This means that the services aren't likely public but private, or perhaps are very selective. Also, their public sector might be a lot more efficient giving more bang for the buck, or at least focusing in services instead of welfare schemes, which are generally speaking very expensive. Indeed it seems that most social insurance is done privately in Signapore. Finally, the country is 3rd richest nation in the world, which means 10% can go farther than someplace else.

Not the answer you're looking for? Browse other questions tagged taxation public-economics or ask your own question.

0
Data source for average effective personal income tax rate?
6
How does lowering a corporate tax rate benefit a nation?
1
Is corporate tax an argument in equal income tax (from labour and capital) debate and does the return on capital depend on rate of the corporate tax?
2
Can a spending freeze solve the problem of the Italian enormous government debt?
0
If you charge a single (indirect) tax rate, x% on all goods and services in a country, will you get x% back as tax revenues?
1
What would be the income tax rate be if it were 'flattened'?