Is market failure constant? What properly defines it?

Now perhaps I misunderstood. Perhaps it means whenever there are any net externalities (positive - negative), the market fails. Please tell me if this is right.

Furthermore, from what I've read, I've gathered that the market fails whenever social cost $\neq$ social benefit. But this is a different definition from the one I previously mentioned (the one only dealing with externalities).

when "the production or consumption of a good or service causes additional positive or negative externalities on a third party not involved in the economic activity".

Externalities are but one example of market failure. Market failure is more properly defined as any situation in which a market, left to operate without any intervention, fails to produce the efficient (welfare-maximising) allocation.

Sources of market failure include

To address your actual questions:

"Don't all activities produce externalities"? Yes, but many of these externalities are priced. For example, if I buy an apple then you can no longer consume that apple, which is an externality. However, this does not result in a market failure because the price mechanism in a competitive market ensures that I get an apple and you don't only if I am willing to pay more for that apple than you are. So the apples go to the people who value them the most, which is the efficient thing to do. Since we are doing the efficient thing, there is no market failure.

So, when should we worry about externalities? We should check whether the net effects can cancel each other out. For example, suppose that the private benefit of some action was lower than the social benefit, but that the private cost was also lower than the social cost by exactly the same amount. Then the net effect would be that MPB=MPC at exactly the same quantity where MSB=MSC. The private individual would then take the socially optimal action and there would be no market failure. A market failure only occurs if the externality is such that MPB=MPC at a quantity different to that where MSB=MSC. Only then will the behaviour of the private individual (whose optimal action is to equalise private marginal benefit and private marginal cost) differ from that which is socially optimal.

A note on marginal benefit and cost: 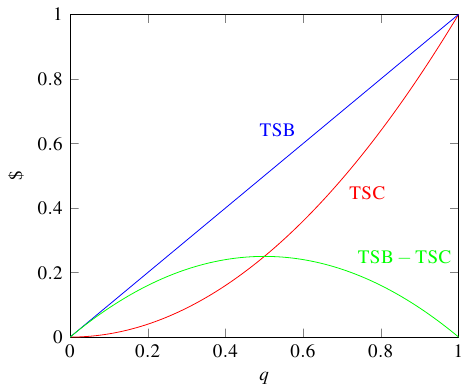 Now, we observe something interesting: the total welfare curve obtains its maximum at exactly the point where the slopes of the TSB and TSC curves are equal: 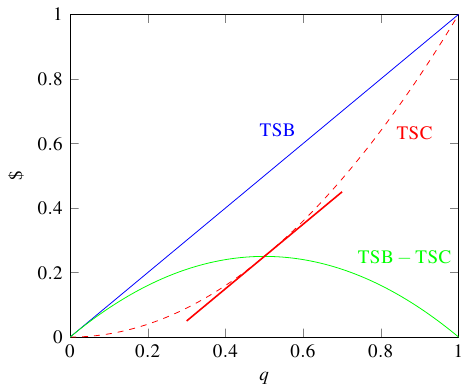 In other words, welfare is maximised when MSB=MSC. This is not a coincidence for this particular graph, but rather is a far more general property.

This is actually quite intuitive. Suppose that MSB > MSC. If we increased consumption by one unit then society would get MSB units of extra benefit and MSC units of extra cost. Since MSB > MSC, this results in an increase in total social welfare. Similarly, if MSB < MSC then we could reduce consumption by one unit and society would save more in costs than it would loose in benefits. So neither $MSB>MSC$ nor $MSB<MSC$ can be consistent with maximised social welfare. Only when MSB=MSC do we find that there is no way to increase welfare by increasing or reducing consumption.

To answer your other question of what properly defines market failure:

The market fails when the socially desirable outcome is not achieved through the market. Since the market decisions are made based on cost-benefit analysis, when social (net) cost/benefit = private (net) cost/benefit then private actors in a market will make the socially optimal decision. If this deviates, they won't and hence we have a market failure.

In general there are two broad categories of market failures:

Basically, look at all the assumptions required for the result that the market is efficient. See where those assumptions fail and voila you have found a form of market failure.

Note that not all goods produce externalities as you might think. Further note that yes, very often the market fails. Hence a great amount of markets are actually regulated. For whatever business you open you'll need to register it get a permit, etc. However very often we don't need a lot of regulation. Often the debates are not about whether to have any regulation or not, but rather the necessary extent of regulation. This is because regulation is costly and we don't want to use it if the benefits to it are too small compared to its cost.

I therefore understand an externality market failure not merely as a circumstance where private marginal benefit $\neq$ social marginal benefit but where the inequality causes economically meaningful distortions. Remember that all models are wrong; the practical question is how wrong do they have to be to not be useful. The externality model is useful only when it describes a distortion that large enough to seriously distort demand.

Your economic text book sounds poorly written. To be fair, it sounds like most econ textbooks are. The quote you wrote is a terrible circular definition of externality.

Certainly not all activities cause externalities, at least not significant ones. If I buy a rock from you, there's no externality. No one else is involved. Now you might have gotten that rock by stealing, which would be an externality, but presumably you got it off your own property or bought it from someone else who did that.

If social cost exceed social benefit, then you certainly have a failure. But in such a case its likely a government failure - markets can't really produce negative net benefit. That is, unless you consider violent groups (like gangs) to be market actors.

Ubiquitous's definition is correct enough, but I would define it more specifically:

Most writing on market failures have all sorts of myths and misconceptions baked into them. Ubiquitous listed the following things that are not actually market failures: information asymmetries, market power, and missing markets. None of those things are market failures because they don't prevent optimal allocation of products. For example, there's a reason some markets don't exist - we even have a phrase for it: "there's no market for it".

A lot of things that seem like market failures aren't when you consider the costs. Like information asymmetry. There is a cost to getting information and ensuring equal information. That cost may exceed the value. Without recognizing where there are costs, you can't understand what "optimal" is. Optimal is the theoretical "perfect market". Optimal is a real achievable alternative.

I'm unclear about what you mean, but the answer is almost certainly no. When and how much market failure happens depends on the market environment, which is combination of the legal and social landscapes. If you change a law, you change where and how often market failures. Weird social pressures can do the same, as Freakonomics will attest to.

I wrote a full article on this topic here: https://governology.wordpress.com/2016/07/05/the-role-of-government-part-1/

Not the answer you're looking for? Browse other questions tagged markets externalities efficient-markets or ask your own question.

2
Under what conditions does market failure occur?

13
Differentiate a positive externality and the absence of a negative externality. Tax or subsidize?
3
Market Behavior under expected and unexpected news
9
Are obstructed views a negative externality?
2
Under what conditions does market failure occur?
4
Is market failure the same allocative inefficiency?
3
How can a free market be operated in a way that significant social and environmental costs are intrinsically covered?
3
Is there really an "efficient equilibrium *price*" with externalities?
0
(Microeconomics) How to classify Public Goods and Common Resources in Externalities?
3
Is there any academic source that uses the following 'standard broad' definitions of externality?