Why does China spend so much on agricultural/farming subsidies?

I use the OECD's Total Support Estimates (TSE), which I think is a proper measure of total agricultural subsidies (but correct me if I'm wrong). 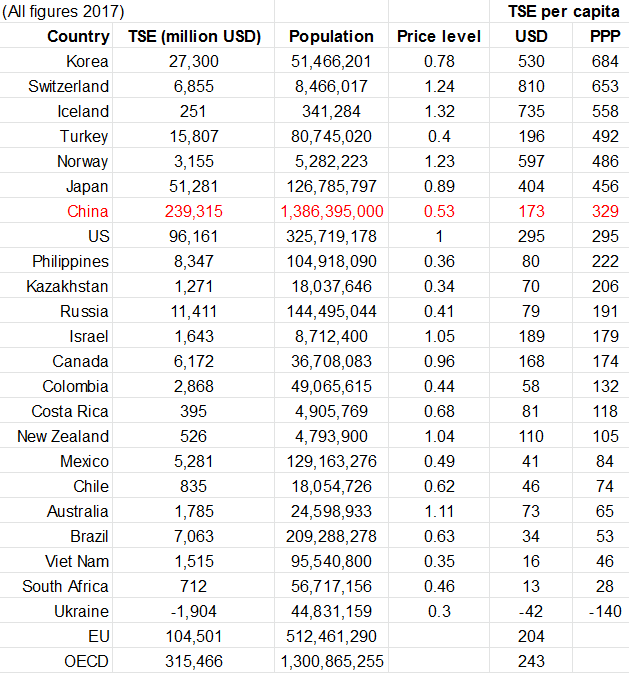 Here are some explanations I have come across for why agriculture is heavily subsidized in the rich democracies:

However, China is not a democracy and so it would seem that the above explanations do not apply. So what explains China's large agricultural subsidies?

*I think (but am not sure) the TSEs given by the OECD have not been corrected for PPP. And so, I have taken the liberty of converting them.

Google spreadsheet with data and sources.

The first thing that comes to mind is food security. China has a large population to feed and does not want to depend on foreign nations for its food.

A (speculative) second reason may be prevention of domestic unrest. The largest share of China's population still lives in rural areas, and by supporting farmers they may silence protests.

A recent article analysing the drivers of China's agricultural policies by Lopez et al., including the fairly recent shift from taxes to subsidies can be found here: https://www.sciencedirect.com/science/article/pii/S0305750X1630211X

4
Why is the term structure curve of agricultural commodities often downward sloping?
3
Why is it that poverty incidence is high in the agricultural sector?
0
Why does state-owned company so aggressive in making profit?
4
Does China subsidize its exports?
4
How does the U.S agriculture subsidy not constitute export subsidies under the WTO?
2
Why does the European Union give subsidies to farmers?
2
Comparative data on agricultural subsidies
0
Why does lowering the value of yuan against the USD disadvantage the US and benefit China