How much would the EU budget reduce by after Brexit?

Assuming no changes due to other countries contributing more, etc. as a result of the UK leaving. It's purely about discerning what proportion of the budget is contributed by the UK's contribution, not what the actual change to the budget will be.

Part A: how much does the UK contributes to the EU Budget

This depends on whether you use fiscal year or calendar year estimates. The figures for the 2015/2016 fiscal year are here. The key is the following graph:

The calendar year estimates are here. The following Table summarizes the data: 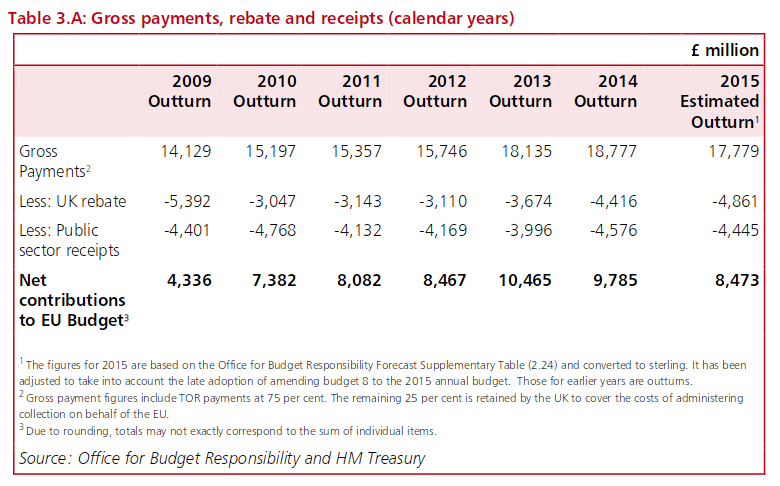 Naturally, the net contribution is what matters for analysis the case of "EU budget without UK". However, as both report point out, the UK receives other contribution, which come from an "allocation of funds via competition". Think of the EU having a fund for, say, improvement in infrastructure. Countries apply to this fund, and some countries get it. Well, as the first report says, the UK got £1bn extra through that mechanism in the 2015/16 year. Should this be counted as part of the exercise? Probably not, because those extra funds would have been allocated to another country anyway.

Regarding 2017, table in page 11 shows only the gross payments, including the rebate, but not the public rector receipts. As such, the effective contribution of the UK is not going to be 12.5% as the document notes, but lower. Given historical levels of receipts, you could estimate that the contribution of the UK to the EU budget would be perhaps around 9%. In any case, as far as I know, this cannot be known ex-ante, reason why it is not included in the official budget document.

Part B: how would the EU budget change after Brexit

Since this relates to a future event, it is impossible to tell. This is for several reasons:

In conclusion, it is simply impossible to tell. The calculations you make are a simple ceteris paribus exercise of removing the UK from the _current EU budget. That might be illustrative, but given the huge uncertainty on the issue, it's probably a rather brute calculation.

Not the answer you're looking for? Browse other questions tagged eu or ask your own question.