Is the trade deficit driven by lack of domestic savings?

NYU Prof Joseph Foudy said the US trade deficit was caused by a lack of domestic savings and that tariffs on China would just shift the deficit to other countries. Zacks says

A country’s trade balance (current account balance) is the difference between the value of exports of goods and services and the value of imports of goods and services. Through national accounting identities, the trade balance can also be expressed as the difference between national (both public and private) savings and investment.

So isn't Foudy really saying we have a deficit because we import more than we export? In other words isn't the lack of domestic savings identical to the deficit rather than its cause?

And we are back to Triffins' Paradox, apparently one of the most under studied and relevant concepts of our time which would answer many of these questions.

when one nation's fiat currency is used as the world's reserve currency, the needs of the global trading community are different from the needs of domestic policy makers. That is the reason we have a trade deficit.

Understood in this light, rising U.S. trade deficits in the 1990s and 2000s were required to provide enough dollars to lubricate rising global trade: 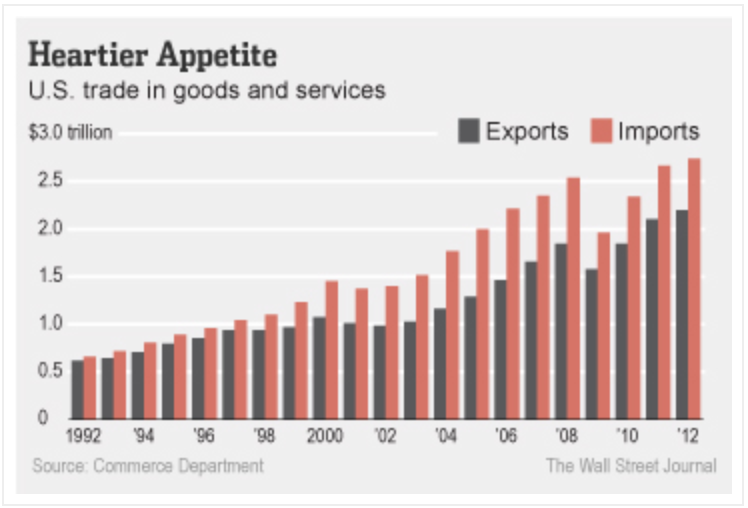 So, what does it mean if our trade deficit begins to decline? From the point of view of this professor, it would mean that we Americans are now saving money, but once again, we live in the age of globalization and we have the worlds reserve currency, so our economy is the whole planet not just within our borders.

Meaning, a declining trade deficit sounds good because we individualize our thinking about economics, oh boy, we are becoming savers, instead of spenders. We do not seem to care that it means fewer dollars are being exported. Who cares, right?

Well, consider that the global economy is about 60 trillion, of which about 25% is the U.S. economy. Into this vast sea of trade, the U.S. "exports" about 400-500 billion in U.S. dollars via the trade deficit. Put in perspective, it isn't that big compared to the machine it is lubricating.

So what happens when there are fewer dollars being exported? Demand for existing dollars goes up, pushing the "price" of dollars up--basic supply and demand, again, it sounds good, until you consider how it affects U.S. corporate profits.

No, their profits don't go up. Most large U.S. global corporations already earn 60+% of their revenues overseas, in other currencies. As the dollar weakened during massive QE, global corporate profits skyrocketed as earnings in euros, yen, etc. rose when stated in dollars.

As the U.S. dollar strengthens, overseas profits will decline when stated in dollars. Shrinking trade deficits means fewer dollars exported into the global economy, which means demand for dollars for trade, reserves and to pay debts denominated in dollars will face shrinking supply. That will drive the "price" of dollars higher.

As the price of dollars rise, U.S. corporate profits will decline as all the goods and services sold overseas in other currencies are converted (at least for accounting purposes) into U.S. dollars.

So let your professor know to be careful what he wishes for as shrinking trade deficits may appear to be positive for the domestic economy, but they won't be positive for a stock market dependent on profits generated by global corporations who earn 50%-60% of their revenues overseas.

Not the answer you're looking for? Browse other questions tagged international-trade or ask your own question.

4
How much of the Greece's public debt is created by its trade deficit?
3
What is the proof for why border adjustments are exactly offset in theory by currency appreciation?
5
Do import tariffs tend to increase a country's exchange rate (if so, why)?
1
Trade in services between the US and China
1
With whom does the US have the largest deficit using the trade in value-added (TiVA) methodology?
10
Causes of trade deficit: Multiple views
0
Do I make correct conclusions about international trade (and ways to increase GDP) from the expedenture approach formula for GDP?