If I shred a $20 bill, is society poorer? What is the effect on the real economy?

If the answer is yes, society is poorer, then the converse must hold true: that the government could make us all wealthier by simply printing money.

Which is it, yes or no? And what are its reverberations throughout the "real" economy?

You have to make distinction between short-run and long-run.

Short-run: In short-run money is not neutral, meaning that in short-run money and other nominal variables can affect real output. A one example why this is true are sticky wages. In presence of sticky wages wages (for example due to nominal contracts that take time to renegotiate) a fall in money supply and deflation would lead to increase in real wages above the equilibrium level. This would cause excess unemployment and loss of output until wages would finally adjust.

So in short-run amount of money and nominal variables in general have a real effect on economy although this effect is not as simple and clear cut as saying that shredding one bill will lower output and printing one more will increase it as the effect of changes in money supply depend on macroeconomic conditions (for example at zero lower bound increases in money supply will be mostly offset by drop in velocity of money see Krugman; 1998). However, discussing fully the reverberations money have in the short run is beyond the scope of SE answer. I recommend having look at Blanchard et al. Macroeconomics: an European Perspective chapters 3-10, 20-22 and 24 with emphasis on chapters 3-10 which have the core.

Long-run: In the long-run you get the classical dichotomy and money are neutral. This is almost definitional since long-run is in macroeconomics defined as a long period of time where among other things prices have time to adjust and are flexible.

This can be best seen from the AS-AD diagram below that I took from Mankiw's Principles of Economics: 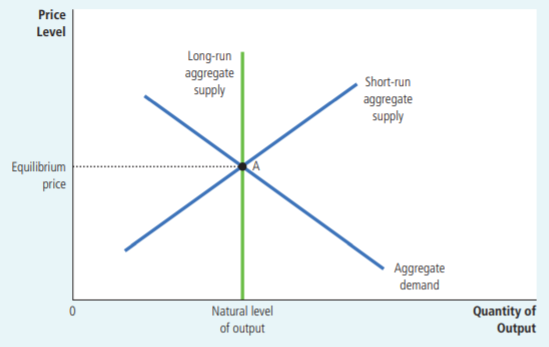 This is intuitive as economy ultimately cannot produce more than it is possible given its production function and resource constraints. If an economy faces following production function $F(L) = 5\sqrt(L)$ and we have $100$ units of labor then we cannot produce more than $50$ units of output no matter how much money we print or destroy. Volume of money in circulation in the long-run does not make factors of production more productive nor it increases the stocks of factors production so by itself it can’t change how much economy can produce in the long-run.

The weak point of your logic is basing it on what happens to a \$20 bill. You can destroy such a bill, or the government can print such a bill, and it seems exceedingly likely that nothing measurable would happen to the aggregate economy. If we cannot measure the difference, we cannot say anything happened. (One can put forward theories about effects, but the theoretical change would not show up in observed data, and so there is no way of validating any theory.)

We need to have a policy that has a measurable effect. Is it likely that a large number of people would simultaneously shred \$20 bills? This seems unlikely (but you never know).

Otherwise, we need a policy that can add or subtract money from many households. Fiscal policy does exactly this - taxes remove financial assets from the private sector, and spending injects financial assets.

In a recession, any Keynesian school of thought agrees that loosening fiscal policy will utilize more resources if interest rates are zero. The only debates happen when interest rates are non-zero, but that debate is too large to discuss here. 1muflon1’s answer discusses this topic in more depth.

To understand inflation or deflation you need a financial model like this for each economic unit:

Next you need a model for direct lending by wealthy households to the working class households and/or a model for wealthy households lending to the working class via financial intermediaries. If no units issue liabilities then no other units hold financial assets, there is no money in the society, and there is no money value assigned to net worth. Economists refer to the zero net worth world as real income or real economic value because you would still prefer to live in a house and the value of living in the house provides economic income over time.

In theory transactions to increase economic value could proceed without the customs that generate or destroy financial assets and matching liabilities of some other unit, but in practice, the price mechanism is used and this depends on the creation or destruction of credit and debt using the definition of the money unit to make finance contracts and clear payment for goods, services, and satisfaction of credit terms. A rampant inflation or deflation would ensue when the credit system is not in good coordination with the production capacities of the economy.

In terms of macroeconomic psychology if we write down the debts of the working class then the wealthy would write down the value of financial assets. This would force the working class to transfer collateral held as nonfinancial assets to the balance sheets of the creditor class. The combination of credit rationing and the transfer of nonfinancial assets from debtors to creditors is a property of recessions and great depressions. There is no long run equilibrium because those who make credit extension or credit rationing or spending decisions do so in real time as conditions change in the economy. There is only a short run decision and action mechanism generating a new transitory response to credit conditions.

Not the answer you're looking for? Browse other questions tagged microeconomics monetary-policy money-supply or ask your own question.

10
What is the calculable effect of counterfeiting on an economy?
16
Should Finland leave the eurozone?
4
Why doesn't the government create money, spend it for free without interest, and recollect it with taxes?
0
What would be the effect on the economy if the United States legalized counterfeiting?
1
How does the pie get larger?
3
Are quantitative easing and helicopter cash really different tactics? And how does QE relate to Modern Monetary Theory?
3
Do open market operations permanently increase the money supply?
0
Interpretation of sub-unity money velocity