Let's say an employee, Mike in Indiana, earns \$10.50 an hour. He gets a raise to \$13, but because he is no longer eligible for SNAP (food stamps), his net earnings actually go down. His wage has passed a certain eligibility criterion, and as a result there's a drop-off in benefits he's entitled to, and net income as a result. We call the situations that lead to these scenarios cliff effects, and a few examples as apply to Mike are shown in the graph below. 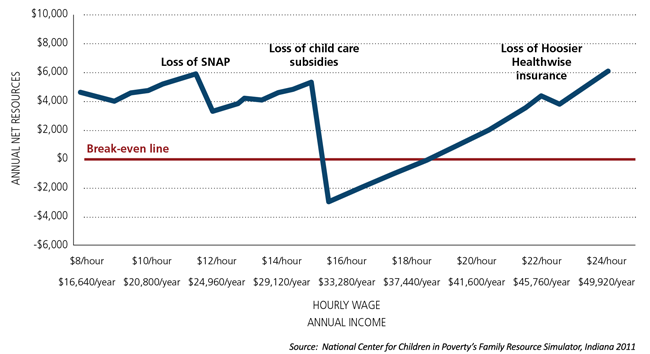 What I'm curious about is a rather specific question owing to the existence of cliff effects. Employees typically don't track earnings by employee after accounting for cliff effects, and so, what is the effect of their ignorance on the economics of the labor market? How does inability of employers to know about cliff effects experienced by their employees affect the market?

There is generally no effect of employers not formally tracking their employees' subsidies on the labor market. Generally speaking government subsidy is already reflected in the labor market whether employers know about it or not.

A trivial example would be policy that gives unemployed people benefits as long as they are unemployed (let's say ${\\\$}100$). Employees only accept job if the benefits of having job outweigh the costs of having it. Simplifying by assuming that only benefit of job is the money and nothing else (unrealistic but does not affect underlaying mechanism) in the above scenario employee won't accept any job offer that does not pay at least ${\\\$}100$.

So in this case whether employer knows about the subsidy or not job will be created only if employer is prepared to bid for the job more than ${\\\$}100$ and only jobs that pay more then ${\\\$}100$ will be created in the economy. Really the only difference between scenario where employer knows about subsidy or don't is that those employers who don't know will wonder about employees rationale for asking ${\\\$}100$ but that has no additional effect on labor market. Employer has no reason to care about whether the ${\\\$}100$ is being asked because that is the employee's value of free time so employee won't accept less or whether this is because of another competing job offer or government subsidy. This the beauty of price system - you don't need to understand people's motivations or preferences or situation - they will already be reflected in prices they are willing to pay or they ask for (in symmetrical fashion some businesses also get subsidies from government that can be conditional on their size/profitability (e.g. some credit for small businesses) -these could affect labor market but are not dependent on employees actually knowing about these subsidies).

The above generalizes to the situations when subsidies depend on the wage as in your description above. Again such subsidies would have effect on employment/wage or other factors, but generally the employer knowledge of those subsidies would not.

Not the answer you're looking for? Browse other questions tagged microeconomics labor-economics externalities regulation or ask your own question.

2
Impact of government subsidy on labour supply
3
Amplification Effects: Negative Denominator
5
Music Streaming Impact on Producers
1
What are alternatives to lottery that would create same economic impact?
2
What would be the economic impact of regulating advertising?
1
Effects of Robotics on the overall marginal propensity to consume
0
EmpirIcal evidence on effects of price floors and ceilings
1
How does demand curve for labor change when there is a proportional payroll tax on employer