What is the effect of Quantitative Easing on the US budget deficit?

Is the deficit getting larger because of QE?

No, the deficit is not getting larger due to QE. Certainly not directly, because that's impossible, and also not indirectly, either.

Quantitative easing is a policy of purchasing government bonds with the intent of decreasing yields while injecting cash into the economy. It affects only the demand for government bonds, not the supply of bonds created by government borrowing.

This shouldn't be a surprise, as the monetary authority (the central bank) and the fiscal authority (Congress) are independent of one another. Congress cannot (without rewriting the Federal Reserve Act) directly control monetary policy, nor can the Fed force the government to borrow more.

Indirectly, Congress could choose to borrow more as a result of QE, due to lower yields on government debt, as the lower debt payments make it cheaper to do so. However, there's not much evidence that this is the case.

The deficit has fallen since 2009 (when it significantly increased due to passage of a large-scale stimulus program consisting primarily of tax cuts but also including direct federal spending, in response to the financial crisis and recession), both in nominal terms and as a percent of GDP. As a percentage of GDP (which is the appropriate long-term comparison, as taxable income is the best indication of a nation's ability to repay a debt), the deficit returned to a normal historical range by 2014.

So it's difficult to conclude even that QE encouraged spending, thereby increasing the deficit indirectly. Given two facts— that the Federal Reserve's QE programs started in earnest in 2009 and continued until late 2014, and that the federal deficit steadily fell during this time— it would be very strange indeed to conclude that QE had increased the deficit.

For considering a question like this, because the Federal Reserve remits seigniorage to the Treasury, it can be helpful to integrate the balance sheet of the central bank and the treasury and consider them as a single entity. Since QE involves the purchase of higher interest rate long dated debt and financing that purchase with lower interest rate central bank reserves, it has the effect of reducing the federal government's costs to finance its debt. Since debt is a major category of spending, as of 2018 about 6-7 percent of the budget, is it fair to say that, all else equal, that the deficit would have been larger without QE, because all other spending would be the same except debt service which would be smaller. However, the hope of QE was that it would improve the economy, which would raise government revenues (higher tax collections) and reduce government spending (say from lower unemployment, disability, and social security benefits), which would further reduce the deficit. The size of these latter effects seem to be in dispute. Some people think that QE had little macroeconomic consequence (The Macroeconomic Effects of Large‐scale Asset Purchase Programmes) but others think they juiced GDP and presumably tax revenues by a substantial amount (Assessing the Economy‐wide Effects of Quantitative Easing, Counterfactual analysis in macroeconometrics: An empirical investigation into the effects of quantitative easing).

However, as a matter of political economy, it is possible that QE, by lowering the cost of debt service, makes deficit financing look relatively more attractive. This should cause some increase in government spending (because it is cheap) and therefore an increase in the deficit. This suggests that the theoretical effect of QE on the deficit is ambiguous. 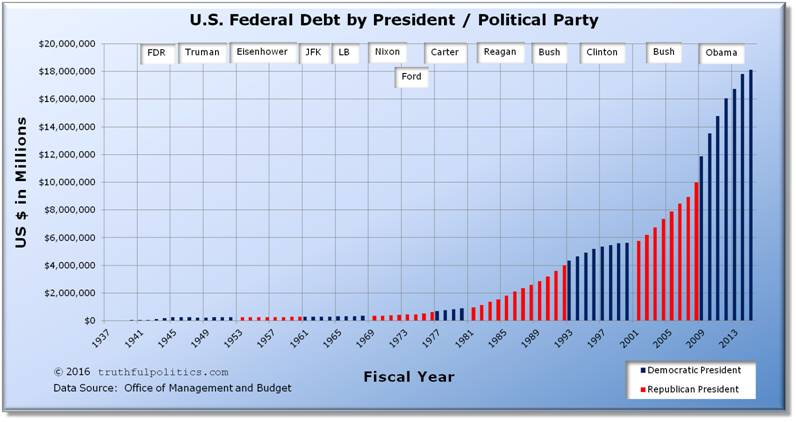 The US Federal debt has only been increasing year on year... from 2009 - 2014 it increased from $10 trillion to $18 trillion. I don't know why you believe it steadily fell over this time.

user20724user20724
1
$\endgroup$
1
Add a comment  |
Highly active question. Earn 10 reputation (not counting the association bonus) in order to answer this question. The reputation requirement helps protect this question from spam and non-answer activity.

Not the answer you're looking for? Browse other questions tagged money-supply federal-reserve quantitative-easing national-bank or ask your own question.