My background in economics is non-existant, I'm just doing some research before the UK general elections and am having some difficulty in understanding certain data.

Assuming the figures found in this and this link are accurate, the UK government spent £714 Billion in the 2014 fiscal year. They generated £619.8 billion in public revenue in the same year. I'd assume the difference between these figures, £94.2 billion, is what they needed to borrow to make up the difference. But the website lists the UK national debt to be of magnitude £1258 billion in 2014 and £1185 the year before, meaning that only a total of £73 billion was borrowed in reality.

Moreover, the HM treasury PESA (page 19) gives public sector current expenditure in 2014 to be ~£666 billion, which is over £45 billion more than what they generated from public revenue. Even if the statistic of £619.2 billion is incorrect, and the government actually generated exactly the £666 billion spent, the difference £714-£666 billion=£48 billion is less than the amount by which the national debt rose in the 2014 fiscal year. I can't get the figures to match up!

Finally, from what I've learned today, government borrowing works by having banks etc. purchase bonds which the government pay interest on, and then in a certain number of agreed years pay the purchaser back what they paid. The statistics for government spending in the second link above show £47.4 billion being spent on interest. However, I can't find any account of the original loans being paid back. That is, surely some of the bonds the government sold should mature each year, requiring them to pay the owner of the bond the original amount they sold it for?

Apologies for my economic naivety.

There are many ways of calculating public sector finances.

One approach is similar to corporate accounting and the UK Treasury publishes Whole of Government Accounts.

Those are different in construction to the Public Sector Finances statistics published by the Office for National Statistics, who follow international National Accounts methodology

In respect of your question of what happens when these bonds mature and are in effect rolled over, does not lead to a difference in treatment: in both cases the repayment is not treated as government expenditure but of finance, and if the new bonds cover the same amount as the old bonds then in effect nothing changes and Government debt stays the same.

The translation from expenditure and revenue to borrowing and changes in debt is not simple. The ONS produced an explanatory article. Separately the ONS published this diagram as part of a bulletin last year which illustrates some of the calculations they did for the 2015/16 financial year: 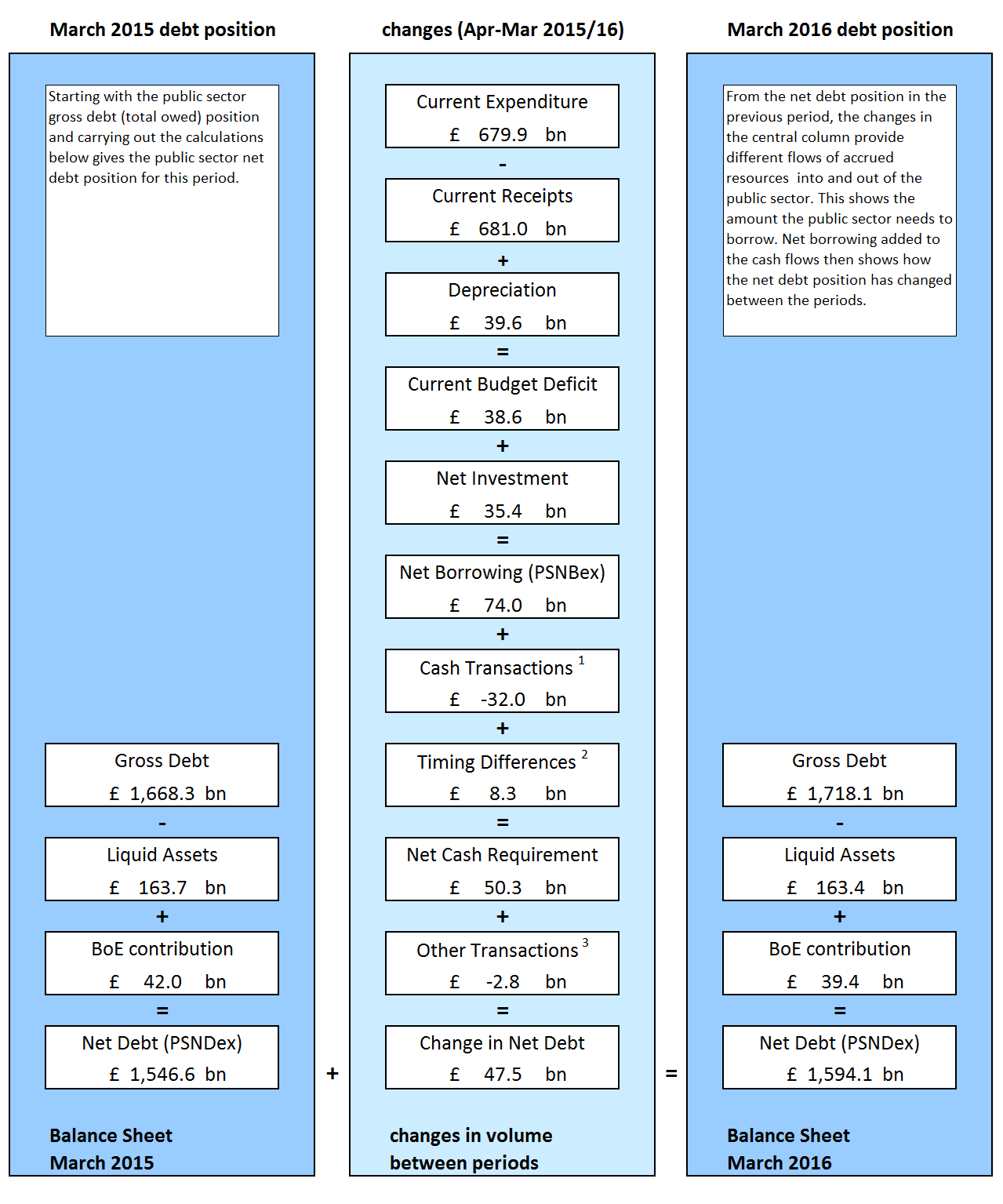 Not the answer you're looking for? Browse other questions tagged debt government interest-rate government-debt or ask your own question.

7
How come the CBO reported the Federal Deficit for FY2014 was \$483 Billion when debt went up by \$1.1 trillion?
4
Why is government debt level presented as ratio to GDP, not against government budget or revenue size?
2
Government debt and Fiscal Theory of Price Level
1
Government debt constraint
0
Extension on the suspension of national debt ceiling
1
Malaysia's national debt - who's correct?
3
Why is national debt bad if the central bank can keep buying bonds?
1
How can increasing debt boost potential returns?
2
Large National Debt by borrowing money from foreign sources
1
Relationship between taxation, national debt, and pool of private investment money