Is it possible to eliminate the U.S. national debt?

A political science teacher of mine has said that the U.S. national debt has grown way beyond reach and is now just a political talking point with no real value. He says that there is no point in trying to pay it back and that it should be left alone since all the money is fiat, thus "imaginary". What's your take on this? Is it still possible to pay off the debt in 'x' amount of years without experiencing hyperinflation?

macroeconomics debt government-debt
Share
Improve this question
asked May 18 '15 at 2:13

Yes, I imagine there's reason to contest that claim. Consider the GDP to debt ratio. While it has risen over time and with the recent recession, it was not too far away from Germany which is considered, I think, the absolute picture of fiscal health.

Consider also the critical point that the US government does not have a chance of death like a normal citizen. For example, if you take 30 year loan from JP Morgan, they consider the possibility that you might die. It is critical that they acquire this money before that happens- or they will lose their investment! The government does not have such concerns, and as a result face supernaturally low interest rates. Furthermore, they can pay back debt at a leisurely pace, extend their debt frequently, and if the interest rate is below the rate of inflation (Which it has been!), then they actually earn money by waiting to pay it back.

One of the main reasons for the increase in the debt-to-GDP ratio has been not an increase in spending, but a noticeable decline in government income. The US tax rates are at historic lows. Even worse the US GDP has been smashed by the recession. The debt could be paid back eventually if it were politically feasible to raise taxes while keeping expenditures constant. The banks of the world have bet billions, trillions if you count derivative and second-stage investments, on this feasibility.

Finally, despite the fact that it is fiat money, it would be very unwise to act as if the debt didn't exist. Note the panic over congress's threat to default. The consequences of even contemplating a default included: higher future interest rates, lower GDP, and typically, a devalued currency. Conversely, if money is printed to cover the debt, the consequence is hyperinflation, leading to widespread drops in the standard of living. In my estimation, if the United States did go into a spontaneous and total default, or hyperinflated to pay the debt- this would likely be the greatest economic disaster of all time, given the size of the US GDP currently. This is not hyperbole- I do not think there is a serious macroeconomist who would disagree.

There is a lot of controversy in economics about the advisability or otherwise of government taxation and deficits, but let's skip that and just look at the figures.

The U.S. National debt held by the public, is approximately \$13.3 trillion. Federal tax revenue for 2014 was slightly over \$3 trillion - which still left a \$500 billion deficit.

Interest rates on this debt are at an all time low. Government 30 year treasuries have an interest rate of 1%. This is a steal. However, at the same time, although inflation at the moment is also low, the money supply is continuing to expand at its typical US rate, which is about ~5-7%/annum. Tax revenue over the long term is a function of the total money supply, but since money creation is concentrated in the financial sector, it is not currently being taxed at very high levels - capital gains and dividends for example attract a top tax rate of 20% in the US.

So on the one hand, the US government is borrowing at a very attractive rate, on the other, it is not taxing efficiently enough to collect enough in taxes to really take advantage of this.

In order to break even, tax revenue would need to increase by ~18%. Any amount above that would eventually result in the debt being completely repaid, it's just a matter of time. Indeed, even if all the government did was balance the books, the progressive growth of the money supply (and accompanying inflation) would over time make the debt negligible.

Would this be economically advisable? This is an open research question. The annual cost of the debt (interest payments) is ~\$430 billion. So interestingly, even if the US government didn't have any debt it would still not be breaking even on its current tax revenue.That suggests that at some point in the future, as in a couple of years after interest rates rise significantly, there will be trouble in store, since the additional interest will significantly add to the deficit. Of course, one way to solve that, would be to tax the recipients of those interest payments (the finance sector for the most part) more appropriately.

It is definitely possible to have a sustained decline in debt to GDP, even at high levels. Between 1996 and 2008 Canada managed to decrease debt to GDP from roughly 80 to 30 percent of GDP. 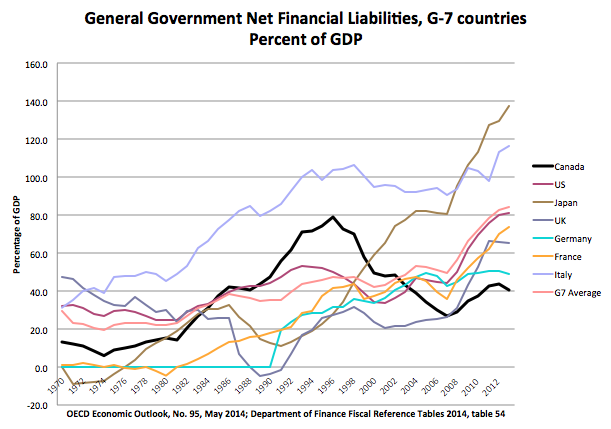 How did they do it?

The federal government achieved these reductions in debt, not with large tax increases, but with substantial cuts in government spending. While Martin’s 1995 budget did increase some taxes, the budget called for six to seven dollars in expenditure cuts for every dollar of increased taxes. Between FY1995 and FY1998, federal government program expenditure (government spending minus interest payments on the federal debt) decreased from C\$123.2 billion to C\$111.3 billion, a decrease of C\$11.9 billion. Moreover, because Canada’s economy experienced mild inflation during this time, the cut in government spending in real (that is, inflation-adjusted) dollars was much larger. In 2002 Canadian dollars, program expenditures decreased from C\$142.44 billion in FY1995 to C\$122.9 billion in FY1998, a real decrease of approximately C\$20 billion. This cut was a real decrease of 14 percent of the government’s budget over three years. It was not until FY2003 that real spending reached the high level it had been at in FY1995. By comparison, if the U.S. government were to cut real spending by 14 percent over the next three years, the budget in FY2013 would be US\$473 billion (in 2010 dollars) less than the FY2010 budget.

Say for example that the US govt. is also putting an extra tax of 10% on the wealth of the rich - the individuals and families that own more than 300.000 $US

Gather all those money in two separate accounts so everyone can see how much money are collected.

The taxing the poor "alternatives":

If you increase the taxes for everyone (austerity) then that will hurt the average citizen and the poor, increasing the poverty. But if you tax the rich, then they can surely afford to pay 10% of their income.

If you reduce the government spending (austerity) then that will hurt the people working in the administration apparatus and of the workers of the companies that live from contracts with the government. That also means increasing the poverty.

Printing a large amount of money and then using it to pay the debts means the incomes of the people will not be adjusted to the inflation - so their buying power will be greatly reduced. And that also means dragging the poor into deeper poverty.

Not the answer you're looking for? Browse other questions tagged macroeconomics debt government-debt or ask your own question.

1
Is it possible to pay the internal debt of the country and to cover the budget deficit by increasing taxes?